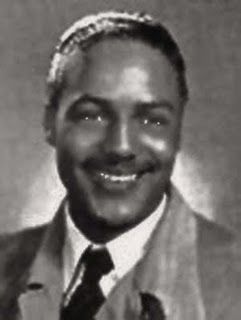 Surfing aficionados credit Nick Gabaldon as California’s first documented surfer of African and Mexican American descent. A skilled recreational surfer, his legacy has inspired many, including especially surfers of color, to consider him as a role model. Born Nicolas Rolando “Nick” Gabaldon, Jr. in Los Angeles, California to parents Cecilia and Nicolas Gabaldon Sr., he grew up in Santa Monica.

Graduating from Santa Monica (SAMO) High in 1945, Gabaldon was one of the few African American students matriculating at the school during this era. Gabaldon served in the United States Navy from 1945–1946. Upon returning home, he enrolled in Santa Monica College where he became an honor student and aspiring writer while he worked as a U.S. Postal Service letter carrier and resumed surfing.

As a teenager, Gabaldon began surfing in the Pacific Ocean at the Bay Street beach.  This beach was derogatorily called the “Inkwell” by Anglos referencing the skin color of the beachgoers who visited the area.  Gabaldon and other African Americans in Southern California, however, transformed the hateful moniker into a badge of pride.

A handsome, athletic and well-liked young man, Gabaldon taught himself to surf using the 13-foot rescue surfboard of a white lifeguard he befriended at the Inkwell in the World War II years. He honed and challenged his surfing skills 12 miles north at the famed Malibu Beach. Before the “Gidget” novels and movies which popularized surfing, legendary surfers such as Bob Simmons, Joe Quigg, and Matt Kivlin respected Gabaldon for his great surfing ability.

Gabaldon was wave riding in Southern California when the sport and beach culture were emerging as a mass culture lifestyle which influenced fashion, music, and movies. Although he experienced a common bond in the water among the surfing community, prejudice was not far away on land or in the ocean. Gabaldon, for example, was called derogatory names by some white beachgoers but rarely by fellow surfers. Besides the bigotry reflected in limited beach access, Gabaldon and other early black surfers had to deal with the challenge of purchasing the necessary equipment and having access to transportation that brought them to the best surfing locations.  Nonetheless Gabaldon exhibited the courage and dedication to be a participant in this particular sport heretofore associated mainly with white Southern Californians and the people of the South Pacific.

Nick Gabaldon died in a surfing accident at the Malibu Pier in 1951.  He was 24. Although little is known about the details of his life, his passion, athleticism, discipline, love, and respect for the ocean live on as the quintessential qualities of the California surfer.

On February 7, 2008, the City of Santa Monica officially recognized surfer Nick Gabaldon and the “Inkwell” with a landmark monument at Bay Street and Oceanfront Walk.