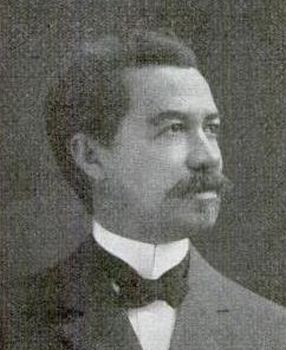 Hugh M. Browne was a civil rights activist and educator.  Born June 12, 1851, in Washington D.C. to John and Elizabeth (Wormley) Browne, he is known for his work as the principal of the Institute for Colored Youth and his advocacy for vocational education.

After graduating from a segregated public school in Washington D.C., he studied at Howard University and graduated in 1875. That year he enrolled in the Theological Seminary of Princeton, graduating three years later and licensed as a Presbyterian minister.

After further education in Scotland, he became a professor at Liberia College in the Republic of Liberia, serving there from 1883 to 1886.  He introduced a course on Industrial Education there, and attempted to reform Liberian higher education. This culminated in an essay he was invited to write, “The Higher Education of the Colored People of the South,” in which he advocated elementary and industrial education over abstract higher education, espousing the opinion that Liberians and blacks in the south currently need practical education and are not ready for a more literary education. His cultural and educational criticisms of Liberia created tension with the principal of Liberia College, leading to his restriction from teaching.

Browne returned to the United States and from 1886 to 1902 he continued his work as an educator and innovator, teaching physics at a segregated high school in Washington D.C. from 1886 to 1897.  He then taught at Hampton Institute in Virginia from 1897 to 1901 and while there patented a device to prevent water backflow in cellars.  He then became acting principal of an all-black public school in Baltimore (1901-1902) and while in that post, married Julia A. (Shadd) Purnell.

Following the resignation of Fanny Jackson Coppin as principal, Browne became the fourth principal of the Institute for Colored Youth (which would eventually become Cheyney University) in Pennsylvania. A strong supporter and friend of Booker T. Washington and Tuskegee Institute, he moved the school toward the industrial education model favored by Washington, and oversaw the relocation of the school 25 miles west of Philadelphia.  He also founded the Training School for Teachers in the institution’s new location.

Browne was a member of short-lived Committee of Twelve for the Advancement of the Interests of the Negro Race, which included both Washington and W.E.B. Du Bois. The Committee aimed to consolidate and share information regarding racial matters, encourage coordination and cooperation among various organizations, and find common solutions between the opposing ideologies of Booker T. Washington and W.E.B. Du Bois. Du Bois left four months after the organization was founded because of disputes with Washington over management and white influence. The Committee successfully lobbied to defeat the Poe Amendment, Straus Amendment, and the Digges Amendment in 1905, 1909 and 1910 respectively.  Each of these amendments would have disenfranchised black voters in Maryland.

Following his retirement (1913), Browne continued to advocate vocational education, studying vocational education for a year in Munich and other cities in Germany, and acting as a consulting director for Cheyney University until his death on October 30, 1923 at the age of 73.