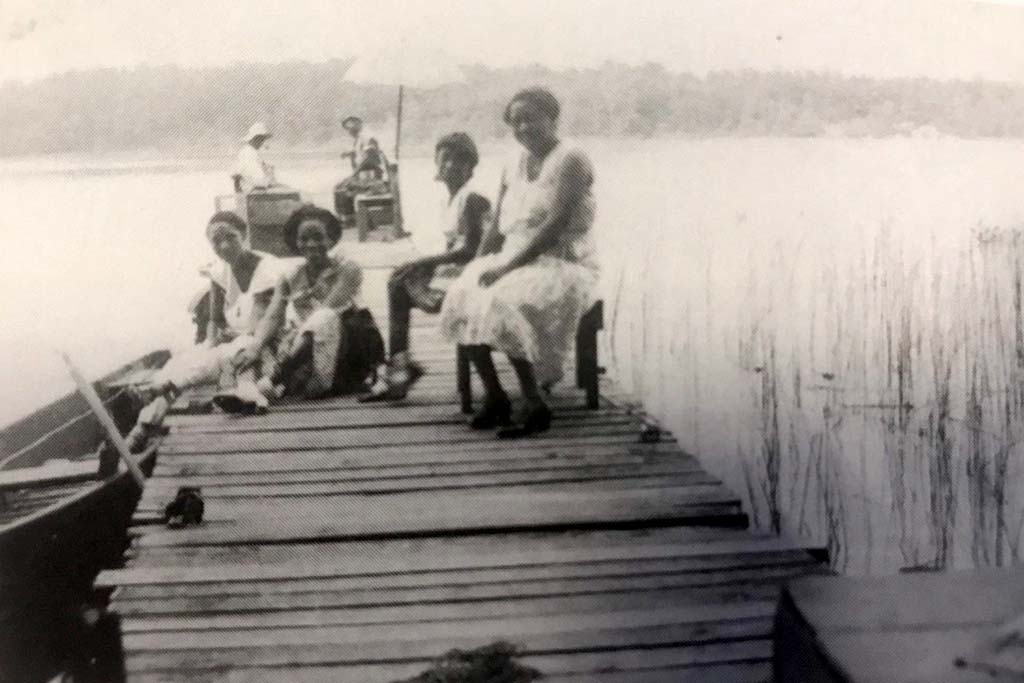 Fox Lake, near Angola, Indiana, is a thriving resort community for African Americans.  Fox Lake took its name from its original owner Daniel Fox, who first claimed the land around the lake during the initial years of settlement of the region.  He established his land claim on May 18, 1836.

Like other black resorts of the late 19th and early 20th centuries, Fox Lake resulted from Jim Crow segregation which prohibited African Americans from vacationing at white resorts.  On September 16, 1924, a group of white Fort Wayne businessmen acquired the land, and—designating themselves the Fox Lake Land Company—established their headquarters in nearby Marion, Indiana.  These men planned to market the land to an increasingly prosperous black community that had few places they could visit which could be considered independent resorts.  They advertised Fox Lake as the first and only resort in Indiana to cater to black families.  Promotional literature described the resort as “a place of their own where they could escape the heat of the cities and enjoy the pleasures of summertime activities.”

Members of Viola Reynolds’ family were the first black vacationers at Fox Lake in 1927.  Reynolds was secretary to the Madam C.J. Walker Company, a cosmetic manufacturing business located in Indianapolis, which was at the time the largest and most successful black-owned business in the nation.  The Reynolds were invited to purchase a cottage by the Boyd family, white landowners who had earlier bought land from the businessmen who controlled the majority of properties surrounding the mile-long lake.  As news quickly spread about the new resort, other families began buying property and building summer homes and rental cottages.  Most black vacationers traveling there during the early 1930s came from Indianapolis, although by the late 1930s, an aggressive marketing campaign attracted families from Detroit, Michigan; Chicago, Illinois; Columbus and Toledo, Ohio; and smaller Indiana towns such as Marion and Fort Wayne.

In the initial decade, as Fox Lake’s popularity increased, community pumps supplied water until residents could dig wells.  Electricity arrived in 1936 and two years later the Fox Lake Property Owners Association was organized, which set up trash removal, road maintenance, and organized activities.  By the 1940s big-name musicians began performing at the resort clubhouse which was surrounded by tennis courts, horseshoe pits, and basketball hoops.

Teens enjoyed swimming at the beach, and dancing and socializing at the clubhouse.  Saddle horses were also available.  During their free weekends, black troops stationed at Baer Field in Fort Wayne during World War II visited the resort and spread its fame beyond Indiana.

Fox Lake managed to avoid the decline that affected so many other black-oriented resorts across the United States as desegregation opened formerly exclusively white facilities and communities to African Americans and other communities of color.  Since the 1990s, fraternal organizations, church groups, and alumni associations have hosted meetings at Fox Lake, which continues to serve as a flourishing black family-centered resort community.