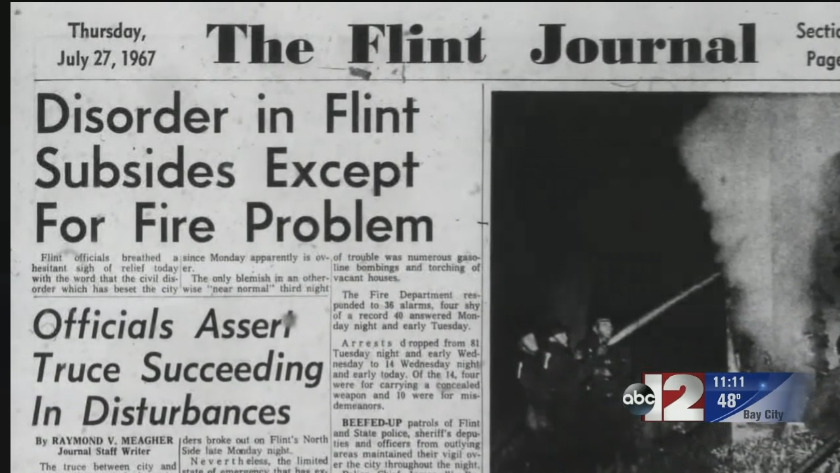 The 1967 Flint, Michigan Riot was among the over 150 urban disturbances that arose during what has been coined as the “long hot summer” of 1967. Prior racial tensions and underlying resentments were an unfortunate common theme shared in many of these instances of civil unrest.

In Flint, as with many other cities in Michigan and around the United States, blacks were locked out of better housing due to discriminatory laws and were restricted to residing in certain areas of town. In addition, the housing that was available for African Americans was noticeably inadequate when compared to the residences of their white counterparts.

The unrest that arose in Flint was secondary to the violence that was developing in the nearby city of Detroit. A police raid on an unlicensed bar on July 23, 1967 in Detroit ignited the events that occurred there and this anger would eventually spill over to Flint. At 10 p.m. on July 24, in the largely black areas of Flint, vehicles were stoned, businesses were firebombed, and store windows were smashed. This resulted in a state of emergency being declared by Flint Mayor Floyd J. McCree, ironically the first African American to hold the post. McCree’s order stated that no liquor or gas could be bought and only law enforcement could carry weapons in the city. One hundred two people were arrested for their part in the disturbances and the Flint fire department responded to 40 calls.

Mayor McCree summoned local public officials together including the county prosecutor, Robert F. Leonard. During the meeting local black leaders cautioned that greater unrest could result if responses to the concerns of the black community were not heard and acted upon. In an attempt to deescalate the situation, Leonard released those who had been arrested under the condition they return to their communities and try to restore peace. Flint police officers were enraged at the prosecutor’s decision but his gamble paid off when further violence was avoided in the city.

Flint and Detroit were not the only Michigan cities that saw disturbances in 1967. Grand Rapids, Lansing, and a handful of other cities experienced varying levels of violence as well. These events in the state prompted Michigan Governor George W. Romney to propose a statewide ban on housing discrimination in an attempt to ease racial tensions. Although the proposal was vehemently opposed by members of the Michigan state legislature and many white citizens throughout the state, it was signed into law in 1968. The disturbances also provoked harsher penalties at both the state and national level for rioters and led to more riot training for law enforcement.