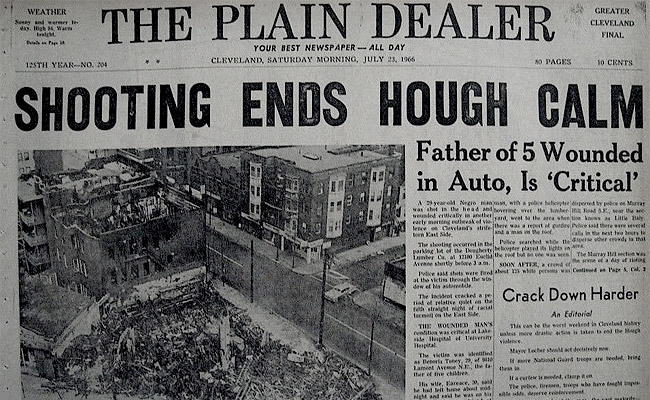 Cleveland’s Hough Riots of 1966 was the first major racial uprising of the decade in an Ohio city but preceded by two years the much more extensive uprising there in the aftermath of the assassination of Dr. Martin Luther King, Jr. in April 1968.  It was, however, a continuation of a series of national confrontations that began sweeping across the nation in 1964 and to that date, the longest riot in the 1960s.

Between 1950 and 1965 the Hough neighborhood in eastern Cleveland, which had been predominantly white and middle class, transitioned into an overwhelmingly black area. This rapid transition, which negatively impacted property values and dramatically increased the neighborhood’s population, came when the entire city experienced post-World War IIeconomic decline. Those reasons combined to generate growing racial tensions in that area and across the city.

Those tensions led to violence in the summer of 1966.  On the afternoon of July 18, a 26-year-old mother recalled only by her first name, Louise, entered the Seventy-Niner’s Café on 79th street, soliciting money for the children of her deceased friend, Margaret Sullivan, in order to pay for the burial.  While this was a customary practice in the city, Louise was ordered to leave and told that no collections would be made in that Café because she was black.

Later that evening a black man, came into the Café asking for a cup of water to go. He was denied the water by the owner who soon afterwards placed a sign outside the door stating, “No Water for Niggers.” Once news of these incidents traveled around the neighborhood, a crowd of black women and men began to fill the area around the Café. When Cleveland police were called to the scene, the crowd began throwing rocks which escalated later that night into vandalism, lootings, arson, and gunfire. The riot that began that night continued for one week as state police and Ohio National Guardsmen, who arrived on July 20, were called to assist the local police force.

On July 25th the riots ceased. By that point four African Americans had been killed, 30 were injured, nearly 300 were arrested, and approximately 240 fires were reported resulting in an estimated $1.2 million dollars’ worth of property damage. White-owned stores were especially targeted and many were looted, burned, and destroyed. While the economic decline of the Hough neighborhood began long before the 1966 riots and was in fact one of the underlying causes, the uprising accelerated the decline, which would last for generations to come.

The Riots left a mixed legacy. The Hough Area Development Corporation (HADC), one of the nation’s first community development corporations, began in 1967 as a consequence of the riot. HADC worked to revive the neighborhood yet Hough continued to see depressed inner-city incomes and property values. The recognition of the need for change in Hough and other Cleveland black communities also energized black and liberal white voters who in 1967 elected Cleveland’s first black mayor, Carl Stokes.