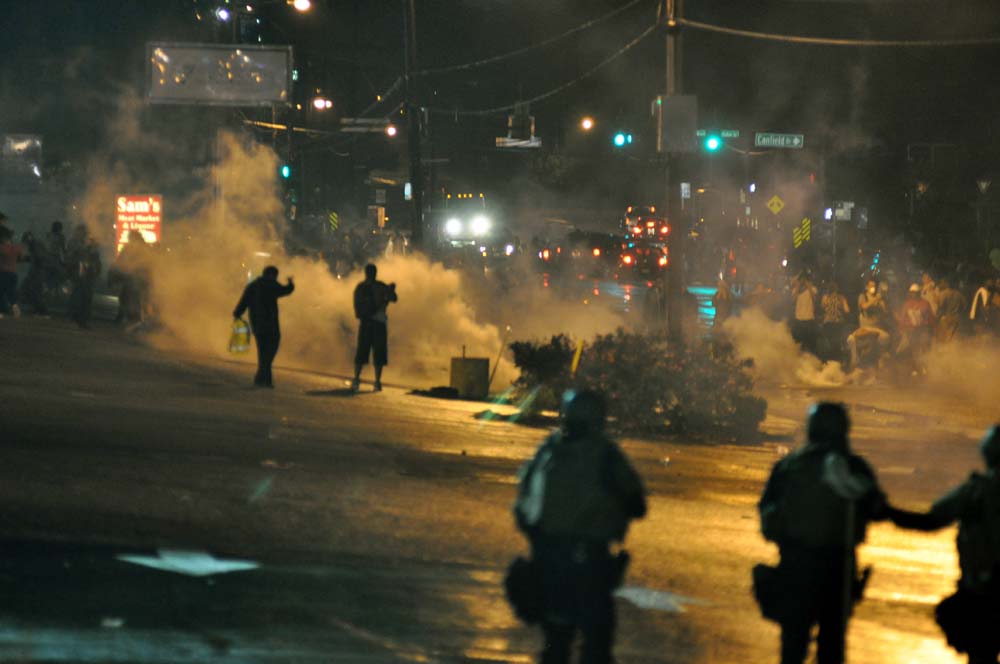 The Ferguson Unrest and Ferguson Riots were a series of several riots and protest triggered by the fatal shooting of Michael Brown, an 18-year-old African American, in the city of Ferguson, Missouri, U.S. by Darren Wilson, a white police officer, on August 9th, 2014.  Exact details on the incident remain uncertain and continue to be disputed. Some accounts report that Brown made no threatening movements towards the officers while others state that Brown charged at Wilson and attempted to take Wilson’s firearm. The police claimed that Brown was a suspect in a nearby store robbery and that the items had been spotted in his possession, prompting their action.  Some witnesses said that Brown put his hands up and others said that he ran for his life.  The conflicting accounts were the subject of much controversy in the following days.  Several peaceful protests occurred in addition to incidents of looting and violent unrest.  In anticipation of violence, a curfew was established in the area and riot squads were deployed.

Multiple investigations followed in the wake of the incident. St. Louis County Prosecutor Robert McCulloch began a criminal investigation into whether or not the use of lethal force was justified.  U.S. Attorney General Eric H. Holder, Jr.investigated if Brown’s civil rights had been violated; Holder attempted to determine if Wilson apprehended Brown mainly due to his race.  Additionally, federal investigators delved into the records of the Ferguson Police Department in an effort to determine if there were recurring issues of excessive force, discrimination, and other such improper behavior.

A grand jury was convened to decide if Officer Wilson should be charged with any crimes based on the results of the investigations.  It took multiple months to reach a decision and during this time tensions in Ferguson continued to rise.  Multiple protests occurred with escalating levels of violence in police response.  Tears gas was used in combination with rubber bullets, smoke bombs, and flash grenades to disperse crowds of protesters.  Several media reporters on the scene at the time were similarly tear gassed and there are some reports of attempts by the police to take down their cameras and suppress coverage.

The unrest reached a breaking point when on November 24, 2014, the grand jury reached the decision to not indict Wilson on any criminal charges.  Many of those waiting outside the Ferguson Police Department grew violent and the situation intensified.  Multiple buildings were torched and protesters hurled rocks at parked police cars.  This continued into the following day when Missouri Governor Jay Nixon deployed the National Guard and reinforced law enforcement presence in the area, effectively bringing the protests to a stop.