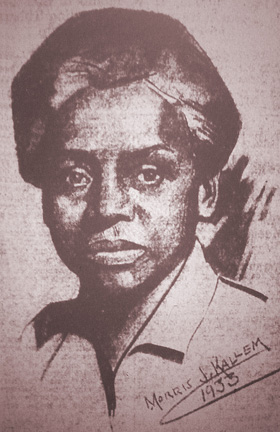 Williana “Liana” Jones Burroughs was an American teacher, radical political activist and the first African American woman to run for elective office in New York. Burroughs was born on January 2, 1882, in Petersburg, Virginia. Her father died in 1886 when Williana was just four years old. The same year, Williana’s mother, who was formerly enslaved for 16 years, left Virginia for New York City, bringing along Williana, her sister Nellie, and brother Gordon. Her mother worked as a cook but was not able to take care of her children, and, as a result, Williana and the siblings spent the next seven years in New York City Colored Orphan Asylum. Shortly after Williana’s sister, Nellie, died of pneumonia in 1893, her mother was able to retrieve Williana and Gordon from the orphanage.

Jones attended public school in New York, and upon graduation enrolled in New York City Normal College, known today as Hunter College. She was the only African American student in her class of 50 students. Jones graduated from Hunter College near the top of her class in 1903 and then obtained a first-grade teaching position in the New York City public school system.  She taught school from 1903 to 1909. In 1909, she married Charles Burroughs, who was a postal worker and an actor. Two years later, Williana gave birth to Eric Burroughs, her first child. It is believed that Burroughs had four children, Charles, Eric, Neal, and Alison.

In 1926, Williana and Charles Burroughs moved to Queens, New York where she taught first and second grade.  After joining the New York City Teachers Union, she became active in the Communist-led “rank-and-file caucus.” By the end of 1926, Williana Burroughs had joined the U.S. Communist Party. Rising quickly in the ranks, in 1928, Burroughs represented the American Negro Labor Congress in the 6th World Congress of the Communist International in Moscow.

By this point, Burroughs, writing under the name “Mary Adams,” published a number of articles promoting Communism in Harlem including “Record of Revolts in Negro Worker’s Past” for May Day 1928. In 1929, she was selected as an alternate delegate to the 6th National Convention of the USA Communist Party.

Traveling between the Soviet Union and the United States, Burroughs became a well-known Communist organizer.  Throughout the 1930s, for example, she was involved in the defense of the Scottsboro Boys. In June 1933, she was dismissed from her teaching position for “conduct unbecoming to a teacher and prejudicial to law and order,” mainly because of her Communist Party activities. She responded by becoming more deeply involved in the Party. In 1934, she was the Communist Party’s candidate for Lieutenant Governor of New York while she ran the Harlem Worker’s School.

In 1935, Burroughs returned to the Soviet Union where she worked as an announcer and editor for English-language broadcasts of Radio Moscow.  She tried to return to United States with her family in 1940 but was declined because of scarcity of English speakers in Moscow during the war. When World War II ended, Burroughs returned to New York with her youngest son. Due to health issues, Williana Burroughs died shortly after her return to United States on December 24, 1945, at the age of 63.