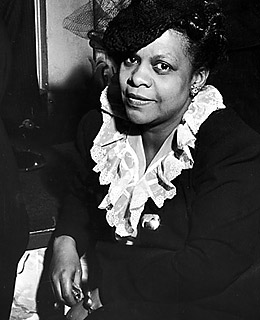 International peace and women’s rights activist, political office seeker, and crime fighter, Eunice Hunton Carter was born July 16, 1899 in Atlanta, Georgia to William Alphaeus Sr. and Addie Waite Hunton who were also prominent educators and activists.   The family moved to Brooklyn, New York when Eunice was five in response to the Atlanta Race Riot of 1906.  Hunton received B.A. and M.A. degrees from Smith College in Northampton, Massachusetts in 1921. While writing her master’s thesis at Smith College, she was introduced to then-Massachusetts Governor Calvin Coolidge, who became her trusted advisor.

Following graduation in 1921, Hunton worked as a social worker before marrying dentist Lyle Carter in 1924.  Several years later and after the birth of their son, she began studying law at Fordham University and in 1934 became the first African American woman to pass the New York State Bar.

Eunice Hunton Carter entered politics in 1934 when she was nominated by the Republican Party to represent New York’s 19th District in the State Assembly. The first African American to gain the Republican nomination for that office, Carter’s campaign centered on the need to reduce the age limit for pension, enforce compliance with legal standards for tenement housing, and the continuation of unemployment insurance. She also opposed racial discrimination in public works employment. Carter narrowly lost by 1,600 votes.

Following the 1935 riots in Harlem, Mayor Fiorello LaGuardia appointed her secretary on the Committee on Conditions in Harlem. That same year, Special Prosecutor Thomas E. Dewey appointed her his deputy assistant in what was to that point the largest prosecution of organized crime in U.S. history.  Carter provided the essential legal strategy in convicting Charles “Lucky” Luciano, the most important Mafia crime boss in New York City by marshalling a massive assault on organized prostitution in New York City.  Authorities raided 200 brothels to gain testimony against Luciano which eventually came from three sex workers. At the time, this was the largest organized crime prosecution in U.S. history. Carter served as Assistant District Attorney of New York County for ten years. In 1938, Carter was named to Dewey’s staff to lead the Abandonment Bureau of Women’s Courts.  In 1945, she entered private practice and connected her work with the National Council of Negro Women to international issues.

In 1947, Carter was one of fifteen American women invited to attend the first International Assembly on Women in Paris, to discuss “human and educational problems affecting peace and freedom.” While there, Carter and Madame Simone Sohier-Brunard, of Belgium, the president of the Union of Colonial Women, compared conditions in African colonies with the status of African Americans in the United States. She was also a consultant to the Economic and Social Council of the United Nations’ International Council of Women.

Eunice Hunton Carter died in New York City on January 25, 1970 at the age of seventy.