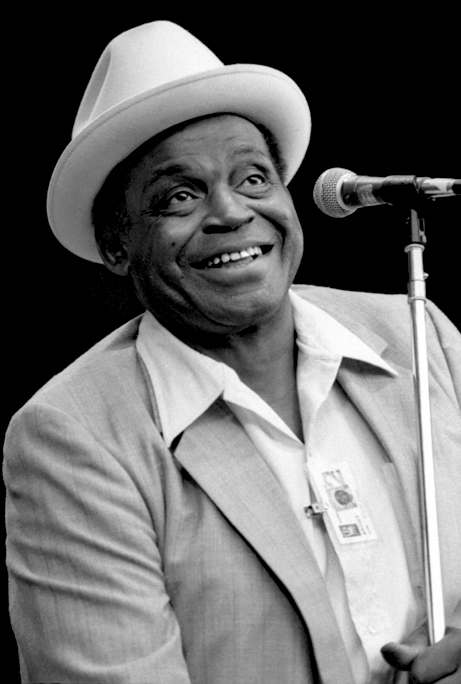 Willie Dixon was a pioneering Chicago blues musician, bandleader, songwriter, arranger, producer, and philanthropist. He was born in Vicksburg, Mississippi in 1915 to Anderson Bell and Daisy Dixon, was married to Marie Booker, and had 12 children (five with wife Marie, and seven with Eleanora Franklin). His grandchildren include blues musician Alex Dixon.

Growing up in Vicksburg, Dixon learned to sing in church and was influenced by his mother Daisy, who practiced a linguistic art in which she often spontaneously rhymed her sentences in poetic form. Gradually he became immersed in the blues, observing and meeting many of the great performers of the period. In 1936 Dixon moved to Chicago to become a boxer, and later decided to become a musician. He learned to play double bass (his main instrument) and guitar. In 1939 he met pianist Leonard “Baby Doo” Caston, with whom he performed in a group called The Five Breezes. As World War II began, Dixon served 10 months as a conscientious objector to the draft, while Caston became a musician in the military. Upon Caston’s return to Chicago, he and Dixon joined forces with guitarist Bernardo Dennis and formed The Big Three Trio, a pop vocal group. In 1947 The Big Three Trio was signed to Columbia Records, bringing Dixon to the attention of fellow Chicagoans Leonard and Phil Chess, Polish immigrants who founded a blues, R&B, and gospel record label called Chess Records in 1950. Dixon began working for Chess as a session musician but by 1951 had become a full-time employee, increasingly involved in administrative activities of the label. His skills as a musician, singer, talent scout, producer, and songwriter, among others, made him central to the success of Chess as well as its subsidiary, Checker Records. He helped build the careers of blues legends including Muddy Waters , Howlin’ Wolf and Little Walter, writing some of their biggest hits and frequently performing on albums and tours with them.

Willie Dixon also worked for the Chicago-based Cobra and Bluesville record labels, and founded his own label, Yambo Records. He became a bandleader and toured as an ambassador for blues music, founding the Blues Heaven Foundation to support blues artists. He helped introduce the use of backbeat in popular music, and played on many of Chuck Berry’s early recordings, thus directly influencing Rock & Roll . He also ensured that Chicago blues retained authentic motifs, rhythms and aesthetics from prewar Delta blues. For example, his song “Spoonful” (1960), written for Howlin’ Wolf, is based on Charlie Patton’s song “A Spoonful Blues” (1929). In 1987 Dixon sued and received an out of court settlement from Led Zeppelin for plagiarizing two of his songs. Dixon received a Grammy award for his album Hidden Charms in 1989.

In addition to being a multitalented, charismatic shaper of postwar blues and Rock & Roll, Willie Dixon was a pivotal cultural ambassador of prewar southern blues. He died of heart failure in 1992 in Burbank, California. He was 76.