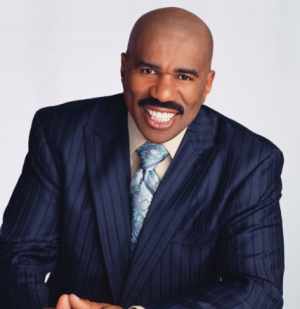 Steve Harvey is a media conglomerate personified in a man whose career began doing stand-up comedy in the mid-1980s. His success as a stand-up comedian led to multiple TV shows and movies, acting, hosting, writing and producing. He became a top-rated radio host, fashion entrepreneur, best-selling author, and popular game show host.

Broderick Steven Harvey was born in Welch, West Virginia on January 17, 1957.  He was the youngest of five children born to coal miner father Jesse, and Eloise Harvey.  After graduating from Glenville High School in Cleveland, Ohio, he attended the University of West Virginia, where he was a member of the Omega Psi Phi fraternity. After college, Harvey worked in a variety of jobs, including boxer and insurance salesman, before launching his career as a stand-up comic in the late 1980s. He achieved national fame in 1997 as one of the Kings of Comedy along with Cedric the Entertainer, D.L. Hughley, and Bernie Mac.

Harvey starred in television in 1996 with “The Steve Harvey Show,” a popular sitcom that cast him as a former R&B singer-turned-vice principal at a Chicago-area high school.  In 2000, Harvey launched a daily talk radio show, “The Steve Harvey Morning Show.” Originally aired only in Los Angeles and Dallas, the show gained national syndication in 2005.   “The Morning Show,” which still airs, features celebrities from the world of sports and entertainment along with humor and music.  The program is heard on more than 60 radio stations by approximately seven million weekly listeners. Because of “The Morning Show” Harvey won Radio & Records magazine’s national Syndicated Personality/Show of the Year award in 2007. “The Morning Show” continues to be the number one syndicated show in the top 25 metro markets across the United States.

From 2003 to 2005 Harvey hosted “Steve Harvey’s Big Time Challenge,” a one-hour program where contestants displayed their talents in pursuit of a $10,000 prize.

In 2009, Harvey released Act Like a Lady, Think Like a Man: What Men Really Think About Love, Relationships, Intimacy and Commitment, which explained men’s behavior when faced with the possibility of relationships, followed by Straight Talk, No Chaser (2010), both of which were on the bestseller lists.  In 2010, Harvey became the first African American host of the popular game show “Family Feud.”

Harvey has been married three times and has four children. He has twin daughters, Karli and Brandi (born 1982) and a son, Broderick Jr. (born 1991), from his first marriage to Marcia Harvey which ended in 1994, and another son, Wynton (born 1997), from his second marriage to Mary Shackelford. The couple divorced in November 2005.  In June 2007, he married his current wife, Marjorie Bridges.

Harvey’s current focus is on family and charity. The Steve Harvey Mentoring Program, which is part of that work, held its 2013 national mentoring camp in Dallas for 100 young men from across the country.  The program is designed to help young men develop educational and leadership skills and prepare for success.