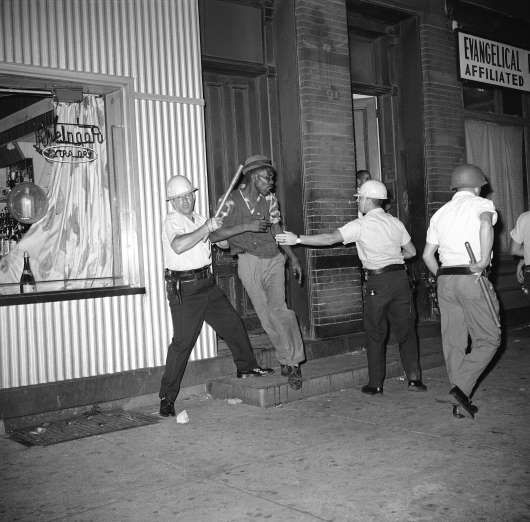 The 1964 Elizabeth, New Jersey uprising lasted from August 11 to 13.  The three-day uprising occurred simultaneously with a separate clash in nearby Paterson, New Jersey and both, according to the Federal Bureau of Investigation (FBI), were the aftershocks of the larger uprisings in New York City, New York (July 18-23), Rochester, New York (July 24-25) and Jersey City, New Jersey (August 2-4).

The Elizabeth uprising began on the night of August 11 when three or four carloads of African American youths began throwing Molotov cocktails and other projectiles at stores and businesses in the waterfront area along the Hudson River setting off fires.  The violence lasted for approximately an hour and Elizabeth city officials believed that this incident was not necessarily racially motivated.  One man was arrested and another was injured.  Three buildings were set on fire by Molotov cocktails and two other nearby buildings were damaged as the flames spread.

The following night violence erupted again as approximately 700 African Americans took to the streets.  This time there were battles between rioters and city police with the rioters using Molotov cocktails, bricks, stones, and other projectiles.  The violence finally subsided by 3:00 a.m. on August 13.  Over the rest of the day there were sporadic mostly minor incidents but the worst of the violence had subsided.  By the end of August 13, 18 people had been arrested.

City officials continued to argue that the uprising was not racially motivated and the Federal Bureau of Investigation’s (FBI) inquiry seemed to concur, citing “school dropouts,” “young punks,” “common hoodlums” and “drunken kids” as the ones responsible for the outbreak of violence.  While socioeconomic problems within the African American communities were considered a part of the problem, the FBI blamed the violence on a marked decrease in respect for law and order by young people in urban neighborhoods for the rioting and violence. Issues such police brutality were, in the opinion of the FBI, not the cause of the uprisings in Elizabeth or elsewhere in the nation.

African American community leaders in Elizabeth saw the situation differently, citing high unemployment, poverty, discrimination, and the treatment of blacks by the police as the causes of the unrest.  With the two sides far apart on the reasons for the violence in the city in 1964, very little was done in response to the uprising.