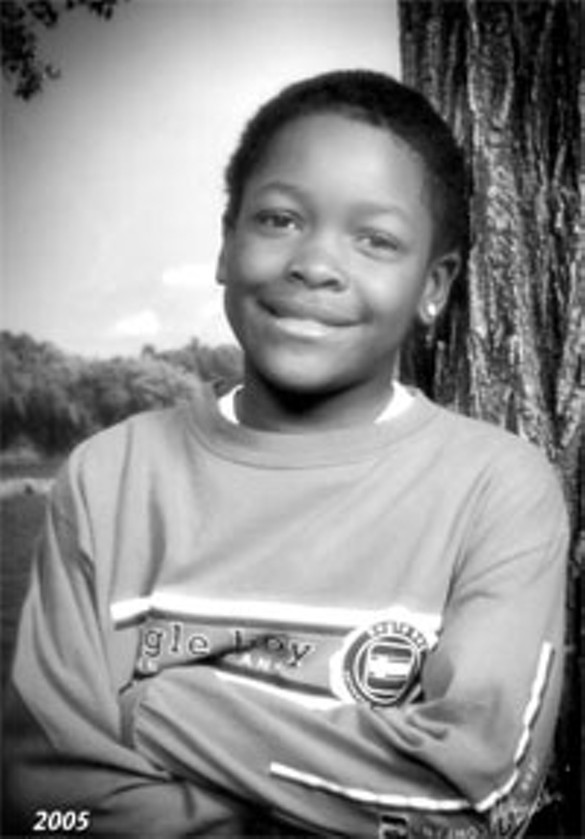 Twelve-year-old DeAunta T. Farrow, killed by West Memphis, Arkansas Police Officer Erik Sammis on June 22, 2007, was one of the youngest victims of a police shooting that year.  His death sparked protests in West Memphis and brought national attention to another death of an unarmed black citizen at the hands of police officers.  His shooting death was also an early inspiration for the Black Lives Matter Movement that would begin six years later.

DeAunta Farrow was born on September 7, 1994, in West Memphis, Arkansas to Robin Perkins and Debra Farrow. Much of his early life is unknown. Just prior to his death he graduated from the sixth grade at Maddux Elementary School in West Memphis.

On the evening of June 22, 2007, Farrow was walking with his 14-year-old cousin, Unseld Nash, Jr, from Farrow’s home to the nearby Steeplechase Apartments where Nash lived.  Along the way the two made a stop at a gas station where they purchased soda pop and chips from the station’s convenience store, and continued down the street.

Farrow and Nash turned up the street leading to Nash’s apartment.  At that point two undercover West Memphis police officers, Jimmy Evans and Sammis, who were on a stakeout in a narcotics investigation, appeared from a nearby dumpster.  According to some eyewitnesses, the two police officers confronted the young men and soon afterwards Sammis, noticed something bulging in the 12-year-old’s coat pocket.  As Farrow removed the item, Sammis shot and killed him.  Sammis and the West Memphis police claim that Farrow pulled out a toy gun and made a gesture at the officers at which point, Sammis, fearing for his life and the life of his partner, shot the boy.  Eyewitnesses claimed that Farrow pulled out the soda pop and chips he had just purchased.

The shooting death of Farrow generated outrage in the West Memphis African American community.  Four days after the shooting, hundreds of angry residents packed a police commission meeting at the West Memphis City Hall where they demanded answers.  They received none as city officials called for calm and asked that everyone wait for the results of a police investigation.

Farrow’s funeral was held on July 1, 2007 and drew 1,500 mourners who turned out to pay their respects. Rev. Alfred Charles Sharpton Jr. flew down from New York City, New York and gave the eulogy at Farrow’s funeral.  Sharpton used the service to demand more information about the shooting from city officials Meanwhile Debra Farrow filled a $125 million-dollar lawsuit against West Memphis Arkansas Police Department which remains undecided. On April 22, 2011, however, the U.S. Justice Department after its own investigation, ruled that the two West Memphis Police Officers, Sammis and Evans acted properly under the circumstances and thus could not be held liable for the death of Farrow.