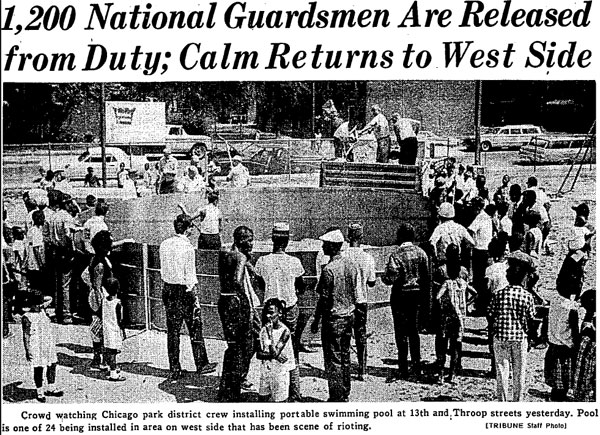 The 1966 Chicago, Illinois uprising, also known as the West Side Riot, began on July 12 after police and African American youth clashed over the youth opening fire hydrants and playing in the water.  African Americans complained that the police were singling them out while in the nearby Italian neighborhood, police did not interfere with open fire hydrants.

An ex-convict named William Young, after attempting to open a fire hydrant, was chased by police officers Biaggio Panepinto and James Rizzi.  As Young ran he shouted to others in the area that the two policemen were attempting to kill him.  An angry crowd of approximately 200 people surrounded Panepinto and Rizzi and demanded that they release Young.  Panepinto and Rizzi did, and escaped but the crowd began to loot nearby stores.  The violence escalated from there and by the end of the evening 24 African American youth were arrested and many people, including a number of police officers, were injured.

Initially Chicago Mayor Richard J. Daley dismissed the previous day’s events as mild incidents but that evening around 200 African American youth began looting and fighting with police. Daley ordered 400 police officers to the neighborhood.  In response rioters threw Molotov cocktails and engaged in shootouts with police.  The press labeled the riot as a battle between African Americans and police.  That night 20 people were arrested and as many were injured.

On July 14, day three of the riot, six policemen were shot along with an undetermined number of civilians.  By midnight at least 118 people had been arrested as police armed themselves with machine guns, shotguns, rifles and tear gas.  The Chicago Transit Authority was forced to shut down El trains on the West Side as snipers fired at random targets from rooftops. Police also claimed that a mysterious “paramilitary” group of African Americans was planning to wage guerrilla warfare in the streets and arrested 21 alleged members of this group.

The next day, July 15, Mayor Daley contacted Illinois Governor Otto Kerner Jr. who ordered 1,500 National Guardsmen to patrol a 140-block area of Chicago’s West Side with orders to shot looters on sight. With their presence the violence subsided.  Over 30 people were reported injured during the uprising, including six firemen and six policemen.  Two people were killed by stray bullets, a 14-year-old pregnant girl and a 28-year-old man. Two hundred people were arrested the night of July 14 alone bringing the total number of those arrested during the uprising to 244.

Martin Luther King, Jr., who was in Chicago for a civil rights demonstration a few days earlier, was critical of city officials and police for the escalation of the violence and blamed socioeconomic problems as the causes of the uprising.  In 1964, one in three people in Chicago was African American while unemployment among African Americans was three times that of white Chicagoans and African American income was 40% less than white Chicagoans.  Daley and other city officials blamed juvenile delinquents for starting the trouble.