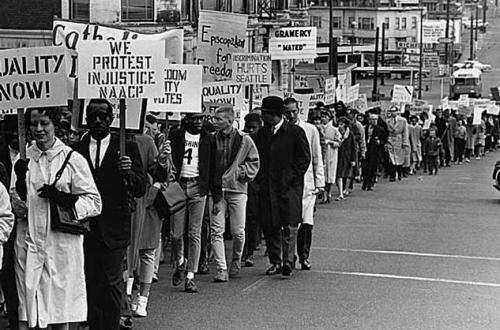 One of the driving forces of the Civil Rights Movement in Seattle, Washington was the desire to end unfair employment discrimination in the city. The Congress of Racial Equality (CORE) was at the forefront of the Seattle struggle to ensure equal employment in the 1960s.  In 1961, CORE successfully led several demonstrations against the unfair hiring practices of such local employers as the Bon Marché, Nordstrom, and Safeway. Although the protests resulted in several isolated victories, by the summer of 1964, it was clear that the majority of African Americans in Seattle still faced unfair employment opportunities. Thus the Drive for Equal Employment in Downtown Seattle (DEEDS) was launched.

The main purpose of the DEEDS campaign was to engage not only select employers, but the entire Seattle community in awareness of employment discrimination and to bring about change. The DEEDS campaign worked slowly and thoroughly; the first step was to organize a research team to produce a report that detailed downtown employment discrimination. According to the study, only two percent of 62,000 downtown employees were Black; of those, one-third were janitors. The study concluded by suggesting that a total of 5,000 new hires be made in the next year, of which 1,200 would be African American.

When downtown business leaders ignored the request of the DEEDS report in October 1964, CORE leaders responded by initiating a four-month boycott of downtown stores. A few businesses changed their hiring practices, but most just purported to pursue equal employment without acting upon their promise. Although the victory was initially subtle, the DEEDS campaign was successful in bringing fair employment to the forefront of important issues for the city of Seattle in the mid-1960s, and from 1965 on, the number of African Americans working in downtown stores and offices would continue to grow.

Quintard Taylor Jr., The Forging of a Black Community: Seattle’s Central District from 1870 through the Civil Rights Era (Seattle: University of Washington Press, 1994).