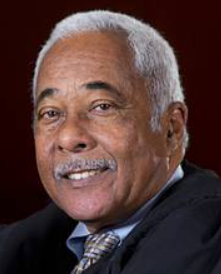 Justice Michael Douglas is the first African American Justice of the Nevada Supreme Court.  He was first appointed in 2004 and has twice served as Chief Justice of the court.

Justice Douglas was born in Los Angeles, California and graduated from California State Long Beach in 1971 and Hastings Law School in 1974.  Upon graduating, he joined two friends moving to Philadelphia, Pennsylvania to start a private law firm.  When his friends later moved to Washington, D.C., Justice Douglas decided to move back West and was offered a position with Nevada Legal Services.  When he arrived in Las Vegas in 1982, there were 10 or 11 black attorneys in the whole state, and Justice Douglas worked with the recently chartered Las Vegas Chapter of the National Bar Association (the bar association focused on African American lawyers) to encourage black students to go to law school and practice in Nevada.  Together they raised money to create a National Bar Association scholarship.  At that time, Nevada did not have a law school, so the work involved not only encouraging black students to go to law school but also persuading them to come back to Nevada after graduation.

In 1984, Justice Douglas went to work for the Clark County District Attorney.  In 1996, he was appointed by Governor Bob Miller (a Democrat) to be a judge on the Eighth Judicial District and was retained in the next election.  He was elected Chief Judge in 2003.  While with the district court, he worked with the legislature to create dedicated funding for specialty courts, drug, alcohol and mental health courts, that support diversion and recovery for people suffering from mental health and substance abuse issues.

In 2004, Justice Douglas was appointed to the Nevada Supreme Court by Governor Kenny Guinn (a Republican).  He continues to support and oversee the specialty courts, serving as Chair of the Nevada Specialty Court Funding Committee.

While on the Supreme Court (elected to two additional terms in 2007 and 2013), Justice Douglas served on the Nevada Supreme Court Access to Justice Committee, where he worked to standardize district court forms and post them on web sites so that petitioners without lawyers are able to access the courts.

For most of its history, Nevada has not had an intermediate court of appeals.  Justice Douglas worked with the legislature to establish such a court, succeeding in getting voter support for the necessary constructional amendment on the second try in 2013.  In 2016, the Las Vegas Chapter of the National Bar Association honored him with its Lifetime Achievement Award.

Justice Douglas, a member of Sigma Pi Phi Fraternity, is married and has a daughter and three grandchildren. He has been a long-time supporter of youth, serving as a volunteer youth coach and a frequent speaker in local schools.