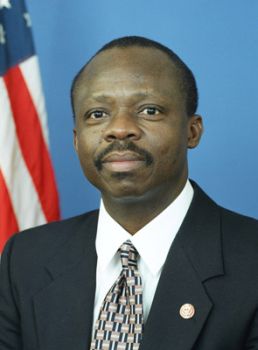 Victor O. Frazer, attorney and politician, was born May 24, 1943 in Charlotte Amalie on St. Thomas, U.S. Virgin Islands to Albert Frazer and Amanda Blyden.   He graduated from Charlotte Amalie High School in 1960.  In 1964, he earned a B.A. degree from Fisk University. In 1971, he received his J.D. from Howard University Law School and subsequently was admitted to legal bars of New York, Maryland, District of Columbia, and Virgin Islands.

In 1974 Frazer began his law career in Washington, D.C. at the Office of the Corporation Counsel (later known as the Office of the Attorney General of D.C.).  He later served as a lawyer for the Interstate Commerce Commission and the U.S. Patent Office.

In 1987 he served as general counsel for the Virgin Islands Water and Power Authority.  Frazer’s congressional interest developed while working as an administrative assistant for California Representative Mervyn Dymally and as a special assistant for Michigan Representative John Conyers.

In 1992, Frazer entered the political arena as a candidate for Delegate from the Virgin Islands.   He unsuccessfully challenged Virgin Islands incumbent delegate Ron de Lugo.  In 1994, Lugo retired and Frazer defeated Eileen Peterson for de Lugo’s vacant seat.  During his tenure in Congress, Frazer urged more federal funding to fight the international drug trafficking in the U.S. territory and increased disaster relief for hurricane victims in the Virgin Islands.   Frazer failed in his re-election bid in 1996.

After his serving in Congress, Frazer returned to practicing law in D.C.  He is divorced and has two daughters, Kaaren and Aileene.