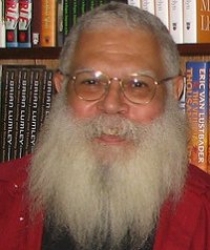 Samuel R. Delany Jr., “Chip,” is an award-winning African American gay writer, editor, professor, and literary critic. He is the first major African American science fiction writer as well as one of the most influential writers of this genre in the United States.  He transformed the field in the 1960s and 1970s with daring and visionary novels.  He has published over 40 works.

Delany was born on April 1, 1942 in Manhattan, New York.  An only child, he grew up in Harlem.  His father, Samuel Ray Delany Sr., from Raleigh, North Carolina, owned the Levy & Delany Funeral Home.  His mother, Margaret Carey Boyd Delany, was a Senior Clerk at the New York Public Library.  They lived above the mortuary.  His paternal grandfather was Bishop Henry Beard Delany, the first black Bishop of the Episcopal Church.

When Samuel was five years old, his mother accompanied him to the Vassar Summer Institute for the Gifted.  He was accepted to the Dalton School, an elite, primarily white prep school and later attended the Bronx High School of Science.  He enrolled in the City College of New York but did not earn a degree.  Throughout his life, he has experienced extreme dyslexia affecting his writing but not his reading.  He received intensive tutoring and therapy for this from age eight to 16.

Delany married poet Marilyn Hacker in 1961.  She knew about him being gay and they had a open marriage.  The couple had one child in 1974, Iva Hacker-Delany, before divorcing in 1980.  Throughout his adult life, New York City has remained Delany’s primary residence despite times of extended travel.  He met his current, nonexclusive partner Dennis Rickett in 1991.  Delany began holding a series of university faculty appointments in the 1980s but has had a permanent post teaching English at Temple University since 2001.

Delany wrote his first novel when he was 20, The Jewels of Aptor (1962).  It, and much of his fiction, combines mythology, linguistics, and deconstructed gender politics.  His writing also includes a frank treatment of sex.  He worked on the Wonder Woman comic series in 1972.  His best known work, Dhalgren (1975), was based on burned out inner cities and explores the life of a black man considered a sexual predator.  It sold over a million copies.  Since the 1980s, he has focused more on non-fiction.  His memoir, The Motion of Light In Water, was first published in 1988.  He wrote a powerful two-part essay about Manhattan’s adult theaters, Times Square Red, Times Square Blue (1999).

Delany received four Nebula Awards for science fiction: Babel-17, The Einstein Intersection, and two of his short stories.  Hugo Awards went to the novella “Time Considered as a Helix of Semi-Precious Stones” and his autobiography.  He earned the Stonewall Book Award in 2007 for his novel, Dark Reflections.  In 2002, he was inducted into the Science Fiction Hall of Fame.  Two lifetime achievement awards have been bestowed upon him: the Bill Whitehead Award for Gay Literature in 1993 and the J. Lloyd Eaton Award in 2010.