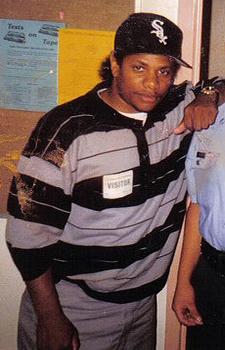 Eazy-E, pioneering West Coast rapper, producer and record label executive, was born Eric Lynn Wright to Richard and Kathie Wright in Compton, California on September 3, 1963.  His mother was a school administrator while his father worked at the post office.

Eazy dropped out of high school in 10th grade, though he would eventually complete his GED.  Compton was notorious in the early 1980s for the simultaneous growth of drug and gang activity, and for a time Eazy allegedly sold marijuana and cocaine.

N.W.A.’s second album Straight Outta Compton (1988) sold over 500,000 copies in six weeks with virtually no radio or video play.  This was due in part to MTV’s refusal to air the video for the song “Straight Outta Compton,” saying that it glorified violence.  One song on Straight Outta Compton in particular, “F— tha Police,” garnered widespread attention for its discussion of police brutality and racial profiling in the crack cocaine era and generated numerous protests from various law enforcement agencies, including a letter of reprimand from the F.B.I. to Ruthless Records.

In 1989 Ice Cube, the lyrical backbone of the group, left amid allegations of financial mismanagement on the part of Eazy-E and Jerry Heller.  N.W.A. continued and produced an EP titled 100 Miles and Runnin’ in 1990.  The group’s final album, Efil4zaggin (1991), debuted at number two on the Billboard chart and reached number one the following week.  But shortly after the record’s release, Dr. Dre, the architect of the N.W.A. sound, also left the group, citing the same reasons as Ice Cube.  N.W.A. was no more, but the attention generated by feuds featuring Ice Cube versus N.W.A. and then Dr. Dre versus Eazy-E demonstrated the power of interpersonal conflict as a marketing tool for rap music.

Eazy-E had nine children: six sons, Eric Jr., Elijah, Marquise, David, Dominic, and Dereck, and three daughters, Erin, Daijah, and Raven.  Eazy was admitted to Cedars-Sinai Medical Center in Los Angeles on February 24, 1995, suffering from what he believed to be asthma.  He later released a public statement on March 16 that he had been diagnosed with AIDS.  He died of complications from the disease on March 26, 1995 just weeks after marrying Tomica Woods.