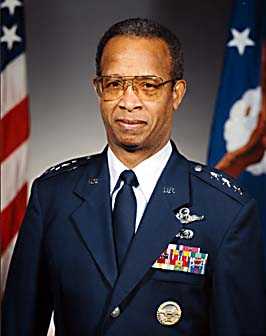 After retirement, Davis also acted as a member of the Drake University Board of Trustees and as President of Tuskegee Airmen, Inc. Davis concluded his military career with more than 4,700 flight hours, the Distinguished Service Medal, Legion of Merit, Meritorious Service Medal, Air Force Outstanding Unit Award, Small Arms Expert Marksmanship Ribbon, and the Air Force Longevity Service Medal among other commendations. During his career, Davis flew B-47s, A-7s and F-16s.  Davis was promoted to Brigadier General in 1982, Major General in 1990, and Lieutenant General in 1998.

Russell C. Davis was born on October 22, 1938 in Tuskegee, Alabama.  He attended and graduated from Tuskegee Institute High School in 1956. Davis began his military career in 1958, at 20 years old, as an aviation cadet. After graduating from pilot training, Davis was assigned to Lincoln Air Force Base, Nebraska as a bomber pilot in the 344th Bomber Squadron.

After his release from active duty in the Air Force in 1965, Davis joined the Iowa Air National Guard and served as a pilot for the 124th Fighter Interceptor Squadron in Des Moines, Iowa. In 1968 Davis became the flight commander of the 124th Fighter Interceptor Squadron. In 1970 Davis was reassigned as an air operations officer for the 132nd Tactical Fighter Group. In 1977 Davis became the officer in charge of the Command Post for the 132nd Tactical Fighter Wing. From 1978 to 1979, Davis acted as the deputy commander of operations at the Iowa Air National Guard Headquarters in Des Moines. In 1979 Davis was appointed as Deputy Chief of Manpower and Personnel for the Air National Guard Support Center at Andrews Air Force Base, Maryland.

During his military career, Davis also sought out opportunities for higher education. He received a bachelor of arts degree in general education from the University of Nebraska, Omaha in 1963. In 1969, Davis completed his juris doctor degree in law at Drake University in Des Moines, Iowa Davis also graduated from the Air Command and Staff College in 1973, the Industrial College of the Armed Forces in 1979 and he also took a National and International Security Management course at Harvard University.