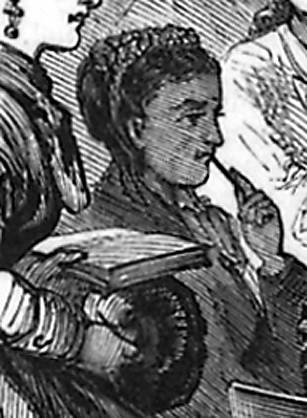 Dr. Rebecca J. Cole was the first black woman doctor in the United States.  Born in Philadelphia, Pennsylvania, on March 16, 1846, Cole was one of five children.

Cole began her schooling at the Institute for Colored Youth and graduated in 1863.  She then attended the New England Female Medical College and graduated in 1864 after completing her thesis titled “The Eye and Its Appendages.”  With her graduation she became the first formally trained black woman doctor in the United States.  She received a second medical degree in 1867 when she graduated from the Woman’s Medical College of Pennsylvania in Philadelphia.

After graduation, Cole went to work at Elizabeth Blackwell’s Infirmary for Women and Children in New York.  After gaining experience there, she moved to Columbia, South Carolina to practice but then later returned to Philadelphia.  Cole also set up practices in North Carolina and Washington, D.C. during her medical career.

Cole was an advocate for the poor for most of her medical career.  She routinely made house calls to slum neighborhoods in Philadelphia and Washington, D.C.  While there she focused on teaching women the importance of hygiene for themselves, their families, and in particular, their babies.  In 1873, Cole opened a Woman’s Directory Center that specialized in providing both medical and legal services to women and children.  She also served as superintendent of the Home for Destitute Colored Women and Children in Washington beginning in January 1899.

In 1876 Cole served as a representative for the Ladies’ Centennial Committee of Philadelphia which planned the local celebration of the 100th anniversary of the Declaration of Independence.  She challenged the Committee’s commitment to racial equality when it asked that she form a separate Colored Ladies Subcommittee to support the white organization.  She argued that colored women should be asked to join to work in common with the committee, not relegated to a separate auxiliary.  She won the argument and black women worked side by side with white women on the committee.

Twenty five years later Cole’s work with the poor led to a well-publicized dispute with the prominent scholar W.E.B. DuBois about his research which resulted in the 1899 book The Philadelphia Negro.  In 1901 DuBois spoke to a woman’s meeting and discussed how he believed blacks were dying of consumption because of their ignorance of proper hygiene.  After thirty years of experience in the social medicine arena, Cole took offense with this conjecture.  She argued that statistical errors and the testimony of slum landlords lead DuBois to a flawed conclusion and that the individuals in the slums were not solely to blame for the high death rate.

After practicing medicine for over 50 years, Dr. Rebecca J. Cole died on August 14, 1922 in her hometown of Philadelphia.