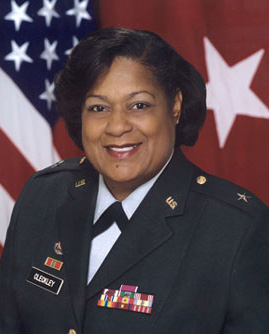 Cleckley was born on September 30, 1944 in Aliquippa, Pennsylvania.  She knew she wanted to go to college so she enlisted in the military knowing the G.I. Bill would provide her that opportunity in the future. She began her military career in 1962 by joining the Women’s Army Corps right after graduating from high school. There, she earned the rank as a specialist E-5.

Julia Cleckley graduated from Hunter College in New York City, New York with a BA in Psychology and Education in 1976 right before joining the Army National Guard. She earned her MS Degree in Human Resource Management from Golden Gate University in San Francisco, California in 1985. In 1993, Cleckley was selected to attend the United States War College on a fellowship to study at the Fletcher School of Law and Diplomacy at Tufts University in Massachusetts.

General Julia Cleckley has two daughters, Helene and Ellen. She married her second husband, John Lee Johns, in 1996 but the couple divorced in 2002. Cleckley published an autobiography in 2014 called A Promise Fulfilled, that tells the story of her life as a wife and mother while serving in the National Guard. She is currently President and C.E.O. of Cleckley Enterprises, a speaking and consulting firm, and lives in Fredericksburg, Virginia.