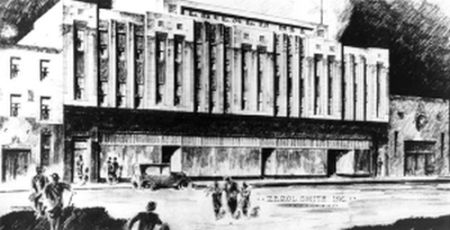 The Chicago Bee was an African American newspaper founded to compete with the Chicago Defender, then the largest black-owned newspaper in the United States.  The Bee’s founder, banker, and food and cosmetics manufacturer, Anthony Overton, wanted a publication that would replace his now defunct Half Century Magazine, a home and homemaker publication targeting African American women who consumed his products. Overton had used Half Century Magazine to promote his line of black-oriented cosmetics for men and women and he envisioned a similar role for the Bee.

Overton also felt the Defender promoted sensationalism, gimmickry, and exploitation of the fears and prejudices of its readers.  Overton promised a more sedate newspaper in tone and content which would adhere to professional journalistic standards and appeal to middle-class, conservative black Chicagoans. Overton promised readers of the Bee a newspaper that would dedicate itself to “higher education for Negros, cordial relations between the races, civic and racial improvement, the promotion of Negro business, and good, wholesome and authentic news fit for any member of the family.”

In order to accomplish this aim, Overton hired Chandler Owen, cofounder of the socialist publication The Messenger as the newspaper’s managing editor. Owen and Overton clashed over politics but the Bee’s owner recognized his managing editors remarkable newspaper skills and instincts.  It should also be noted that for most of the years of its existence during the Great Depression and World War II, the paper was mostly staffed by women.

Overton founded the Bee in 1926.  Three years later, however, he hired South Side architect Z. Erol Smith, to design a new building for the newspaper’s operations and eventually his manufacturing business.  The three-story, nearly block long Art-Deco edifice was completed in 1929 at a cost of $200,000 and named the Chicago Bee Building. Located at the intersection of 36th and State Street in the heart of the Bronzeville District on Chicago’s Southside, Overton meant the building to be a symbol of successful African American enterprise.  In fact one Chicago Bee editor, James Gentry, coined the term “Bronzeville” to describe both the skin color of the newly arriving African Americans from the South and the then vibrant South Side neighborhood that was the center of black business and culture in the city.

Despite his grand desires, Overton’s Chicago Bee never took off as he had hoped.  It achieved a readership of only about 50,000 at its peak in the mid-1930s, far less than it rival, the Chicago Defender. Moreover the Great Depression took a toll on many of Overton’s other businesses which closed because of the economic downturn.  Their failure indirectly starved the newspaper for vital capital it needed to expand.  Although not directly related to the decline of the Bee, the black business center of Chicago moved to 47th and South Parkway by World War II and the Bee and its building were no longer viewed as symbols of the possibility of black capitalism.

Overton managed to keep the Chicago Bee running until his death in 1946. The Chicago Bee Building still stands today and is on the National Register of Historic Places.