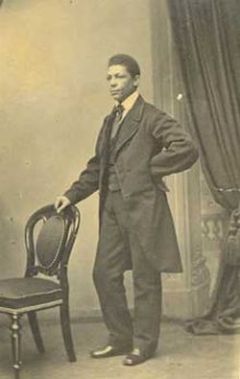 John Sella Martin, who eventually became an influential minister, was born enslaved in Charlotte, North Carolina on September 27, 1832, to Winnifred, a mulatto, and the nephew of her owner.  At the age of six, Martin along with his mother and his sister Caroline, were sold to a slave trader who took them to Columbus, Georgia.  There they were sold to a medical doctor and owned them for three years until bankruptcy forced him to sell his slaves and break up Martin’s family. Martin’s mother Winnifred was sold to an Alabama minister, his sister was sold to a Mobile, Alabama slaveholder, and John, now nine, remained in Columbus with another slaveholder.  Martin would never see his relatives again.

Martin first learned of free blacks from the gamblers who frequented the hotel where he worked.  He also learned to read from a white boy who broke Georgia law prohibiting the practice. When he learned that his mother was visiting Columbus with her owner, Martin attempted to see her but was caught and jailed for seven months.  Ironically it was in jail that he met another white prisoner who taught him grammar, history, arithmetic, and provided information about the North and Canada. Martin was returned to his owner who promised in his will to free the boy on his 18th birthday.  Other family members challenged the will upon the owner’s death and gained control of Martin who was sold off to various owners roughly a dozen times more while he worked as a cabin boy on steamboats across the South.

Finally Martin escaped slavery by forging freedom papers and arrived in Chicago, Illinois on January 6, 1856. Once safe from slavery he began his efforts to end the institution, making speeches with what one observer called his “surprising eloquence and earnest appeals for the liberation of the slave.” Teaming with H. Ford Douglas, a fugitive slave from Virginia who was also on the abolitionist lecture circuit, Martin arrived in Detroit, Michigan in 1857.  Working with a Baptist minister who preached across the state, Martin joined the church and in 1858 was ordained.  He then moved to Buffalo, New York where the 26 year old became the Rev. J. Sella Martin, minister of the predominantly white Michigan Street Baptist Church.

In 1858, Rev. Martin married Sarah, the daughter of a local farmer.  The couple had two children although the first died of an illness when the Martins traveled overseas for the first time.

In April 1859 Rev. Martin moved from Michigan Street Baptist Church to Boston where he became the first black pastor of Tremont Temple.  He briefly led another mostly white Baptist congregation in Lawrence, Massachusetts before moving in 1860 to Joy Street Baptist Church, the oldest black church in Boston.

Martin remained there until 1863 when he became a representative of the American Missionary Association (AMA).  With AMA sponsorship Martin worked mostly in the South promoting Reconstruction. For undisclosed reasons he left the AMA and the ministry in 1873.  J. Sella Martin died in New Orleans, Louisiana on August 11, 1876.  Although he had been battling a chronic illness, his death was ruled a suicide. He was 44.