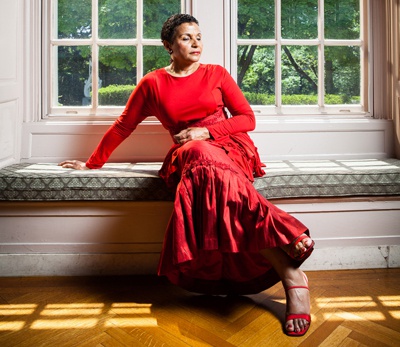 Carmen Arlene Balthrop-Delaney, soprano and arts advocate, was born May 14, 1948, in Washington, D.C., to John W. Balthrop, who was employed by the U.S. Department of Justice in the Printing Office, and Clementine E. Jordan Balthrop, a homemaker. Carmen was the youngest and only girl of four children.

When Balthrop was 8 years old, she heard the legendary opera singer Leontyne Price on the radio, sparking her interest in classical music. In 1967, Balthrop graduated from Theodore Roosevelt High School in Washington, D.C. She was a member of the school’s mixed concert choir and one of the piano accompanists for the ensemble. Afterward, Balthrop enrolled at the University of Maryland, College Park, and received a bachelor of music degree in voice performance in 1971. The following year she earned a master of music degree in voice performance from The Benjamin T. Rome School of Music at the Catholic University of America (CAU).

In 1975, Balthrop won first prize in the New York Metropolitan Opera’s National Council Auditions, one of the most prestigious competitions in opera.  That same year, she played the title role in Scott Joplin’s opera Treemonisha, with the Houston Grand Opera. Balthrop’s Metropolitan Opera debut came in 1977 in Mozart’s opera Die Zauberflöte as Pamina. She also advocated for the arts when she testified before a U.S. Senate Appropriations subcommittee supporting President Jimmy Carter’s proposed budget for the National Endowment for the Arts in 1977. At the end of her testimony, she was asked to perform an aria from an opera. She left the hearing room with loud applause as a 15‐minute recess was called for her to sing to members of Congress and congressional staffers in the hall of the U.S. Capitol.

Balthrop began teaching applied voice at the University of Maryland School of Music in 1985. She also taught movement for singers, opera repertory, and an advanced seminar in vocal pedagogy. Also in 1985, Balthrop married Dorceal Duckens, a union that soon ended in divorce. While the union was short-lived, they became the parents of a daughter, Nicole Duckens Mosley. She then married Patrick Delaney and they had one daughter, Camille Delaney-McNeil.

In 1995, Balthrop was inducted into the University of Maryland’s Hall of Fame. From 1995 to 1998, she was the coordinator of the voice and opera division of the School of Music at that institution. Despite her academic responsibilities, she continued performing with opera companies, including Washington Opera, Deutsche Oper of Berlin, and Opera Columbus in Ohio. Balthrop sang the principal role in African American composer Leslie Burrs’ opera Vanqui in 1999 and later returned to the role from 2016 to 2020. During that period, Balthrop also served as the College of Arts and Humanities’ advance professor at the University of Maryland. From 2020 to 2021, she was the associate director for academic affairs and undergraduate studies at the university.

Carmen Arlene Balthrop-Delaney died on September 5, 2021, of cancer at her home in Mitchellville, Maryland. She was 73.