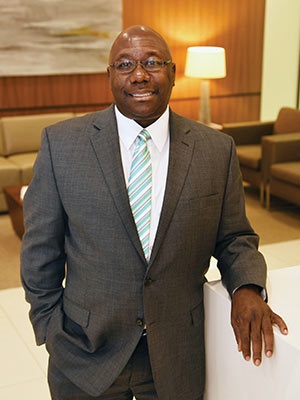 Born in Auburn Alabama in 1958, Claude Brunson was raised in a town with a long history of racial segregation in public accommodations and education.  Recalling his grandmother’s history, he notes that during her adolescence, blacks were not allowed to attend medical school in the state. Yet on August 17, 2013, Dr. Claude Brunson became the first African-American President–elect of the Mississippi State Medical Association, which means he is slated to become president of the Association one year from that date.

Brunson graduated from Auburn High School and spent one year at Auburn University (1976-1977). He joined the United States Navy, where he became a hospital corpsman. The Navy gave him the opportunity to spend four years doing health-associated work, including performing medical inspections. Brunson credits his naval experience with inspiring him to pursue a career in medicine. Prior to his enlistment, he had never met an African American physician.

In 1991, Brunson moved to Jackson, Mississippi to become a member of the University of Mississippi Medical Center (UMMC) faculty. He remains on that faculty at that institution.  He also currently serves as a professor of anesthesiology at UMMC and is the institution’s senior advisor to the vice chancellor for external affairs. Brunson is the state director of the Mississippi Society of Anesthesiologists and an advisor to the U.S. Food and Drug Administration.

In 2012, Brunson was a recipient of the Martha Myers Role Model Award, an award given to University of Alabama Medical School alumni as an inspiration to current scholars.