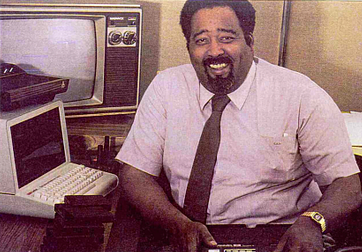 Computer game innovator Gerald “Jerry” Anderson Lawson was born in Brooklyn, New York on Dec. 1, 1940, and grew up in Queens. His parents, both blue collar workers, encouraged his intellectual pursuits. Lawson’s father was a longshoreman by profession and a voracious reader of science books,  Lawson’s mother was a city employee, and also president of the PTA at the nearly predominantly white school Lawson attended.

As a boy Lawson pursued a number of scientific interests, ham radio and chemistry among them. As a teenager Lawson earned money repairing television sets. During the 1960s Lawson attended both Queens College and the City College of New York, but never received a degree. His interest in computing led him in the 1970s to Silicon Valley’s Homebrew Computer Club, where he and Ron Jones were the only black members. While with the club Dawson crossed paths with Apple Computer Inc.’s founders, Steve Jobs and Steve Wozniak. During this period Lawson invented an early coin-operated arcade game, Demolition Derby.

In 1976 Lawson went to work at the computer firm Fairchild Semiconductor.  The technology for creating consoles for home use was then in its infancy, when manufacturers had games built into their circuitry. In 1976, while working as Fairchild Semiconductor’s director of engineering and marketing, Dawson helped to develop The Fairchild Channel F, which allowed users to insert different cartridges that stored new games.  Dawson’s innovation allowed people to play a variety of games in their homes, and paved the way for much more elaborate systems such as the Atari 2600, Nintendo, Xbox, and PlayStation. Though basic by today’s standards, Lawson’s breakthrough idea created the business model for computer games that remains intact in today’s multi-billion dollar computer game industry.

In 1980 Lawson left Fairchild to set up his own games company, Videosoft, which produced games for manufacturers, including Atari. As the processing power of game consoles increased, Lawson found himself disapproving of the emphasis on violence that began to replace the innocent, blocky graphics of his era. Despite expectations of success in the emerging computer gaming market, Videosoft created only one cartridge, “Color Bar Generator,” which was designed to calibrate television color, as well as to adjust the vertical and horizontal picture hold on television sets.  With that one cartridge Lawson and Videosoft never reaped huge profits from the industry that he helped create.

Nonetheless, Gerald Lawson was among a handful of black engineering pioneers in the world of electronics in general and particularly in electronic gaming.  In March 2011 Lawson was honored as an industry pioneer by the International Game Developers Association. Tragically, only a month after receiving the award, Dawson died of complications of diabetes on April 9, 2011, in Mountain View, California. He was 70.  Lawson was survived by his wife, Catherine, and two children, Karen and Marc.