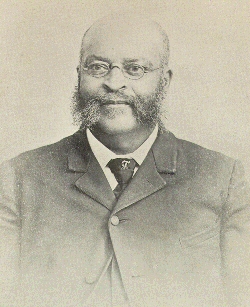 Henry Clay Bruce, brother of the first black U.S. Senator Blanche K. Bruce, was born into slavery in Virginia to parents owned by Lemuel Bruce. He spent the first years of his life in Virginia before he and his family were sold to Jack Perkinson in 1844, and were taken to Chariton County, Missouri.  There Mr. Bruce was rented out as a laborer and also learned to read. Before and after his new master moved him back to Virginia in 1847,  he worked at a variety of positions as a rented slave laborer, including tobacconist, rail splitter, and eventually farm hand supervisor.

In 1864, Henry Bruce encountered some trouble due to his literacy. The master of Henry’s fiancée opposed the couple’s marriage because he was concerned that Henry’s ability to read and write might spoil his slaves. Henry and his wife risked a great deal when they successfully escaped their masters and fled to Kansas that year.  Once in Kansas, Bruce found work as a bricklayer, and several years later the couple bought a house.

Mr. Bruce would remain in Kansas for many years, owning several businesses, running unsuccessfully for public office, and serving a term as an elected doorkeeper for the state senate. In 1881, Henry’s brother Blanche secured him a job at the post office and he and his family moved to Washington, D.C., where he would spend the remainder of his life. Henry Clay Bruce’s life is best remembered today through his autobiography, Twenty-nine Years a Slave, Twenty-nine Years a Free Man, which was published in 1895.