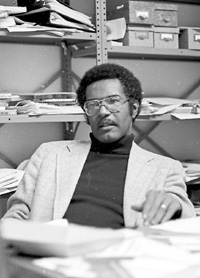 John Wesley Blassingame was one of the preeminent scholars in the study of enslaved African Americans.  His early monographs The Slave Community (1972) and Black New Orleans, 1860-1880 (1973) shattered racist and stereotypical portrayals of African American life by using testimony and evidence left by blacks themselves, evidence which had been largely ignored or dismissed by earlier historians.  With his edited volume, New Perspectives on Black Studies (1972), Blassingame helped to define the developing field of African American Studies.  A prolific scholar, Blassingame also co-wrote and edited, and co-edited many other works.  Among his important contributions are The Frederick Douglass Papers, Antislavery Newspapers and Periodicals, and Slave Testimony.

John Blassingame was born in Oxford, Georgia on March 23, 1940, to Grady and Odessa Blassingame.  He married Teasie Jackson and the couple had two children, Tia Marie Blassingame and John Wesley Blassingame, Jr.  He died in New Haven, Connecticut on February 13, 2000 at the age of 59.