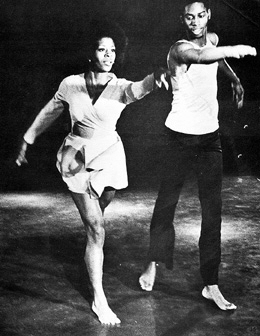 Black Arts/West was Seattle’s first black theatre, eventually became a nationally known entity across the United States. Evolving out of the Civil Rights-Black Power movements of the 1960s, it was founded by Douglas Q. Barnett in 1969. Black Arts/West functioned as a three component program: theatre, dance, and an art gallery displaying the work of local and national artists.  As a division of the Central Area Motivation Program, an anti-poverty agency, it was charged with getting young people involved and learning the necessary skills to survive and flourish in society. The program was able to attract a host of young people who thrived on the discipline and skills imparted by a top notch professional staff including Lorna Richards, Eve Green, Professor Abraham “Dumi” Mariare and others.

Over the years the theatre mounted approximately 100 plays including Dream On Monkey Mountain, A Son Come Home, The Great McDaddy, Five On The Black Hand Side, and What The Wine-Sellers Buy. Top notch directors such as Allie Woods, Jr., Gilbert Moses, Jason Bernard, and Beatrice Winde all came to direct plays at the theatre. A significant number of students became professional actors who later performed on Broadway, in  regional theatres, TV, and professional dance companies. Black Arts/West had three Artistic Directors during its lifetime: Douglas Q. Barnett, Buddy Butler, and the team of Tee Dennard and Doug Johnson. After 11 years, Black Arts/West closed its doors in the spring of 1980.