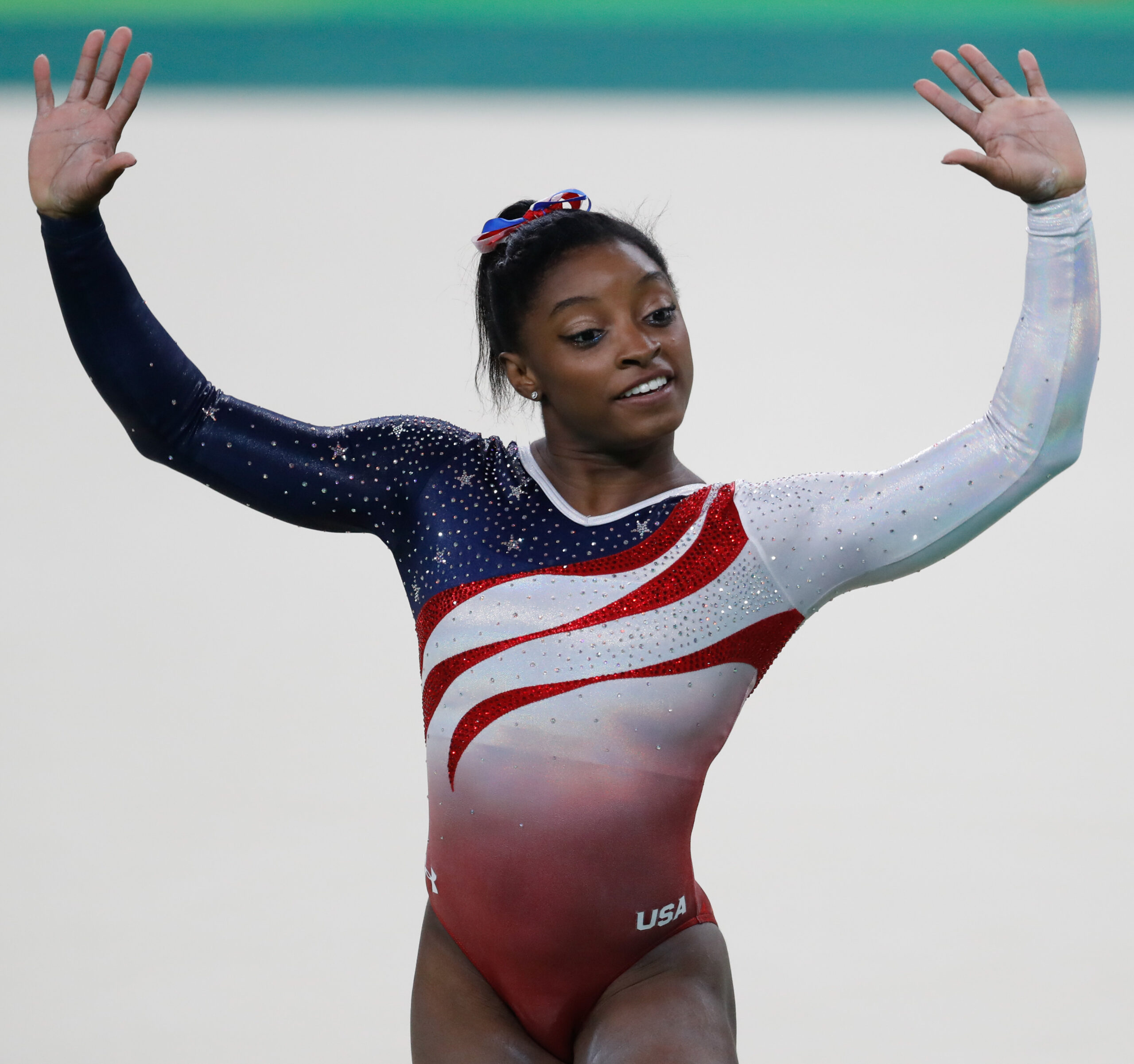 Simone Arianne Biles is an American artistic gymnast. She is a three-time world all-around champion (2013-2015), three-time world floor champion (2013-2015), four-time United States National all-around champion (2013-2016), and a member of the gold medal-winning American teams at the 2014 and 2015 World Artistic Gymnastics Championships. Biles is also a 2016 Olympic individual all-around, vault, and floor gold medalist. She was part of the gold medal-winning team at the 2016 Summer Olympics in Rio de Janeiro, Brazil and also won a bronze medal in the balance beam during those games.

Simone Biles was born on March 14, 1997, in Columbus, Ohio to Shanon Biles and Kelvin Clemons. Her mother, Shannon, was unable to take care of Biles and her siblings Ashley, Tevin, and Adria due to her drug and alcohol addiction. Biles and her sister Adria were taken in by their grandparents, Ron and Nellie Biles, who lived in the north Houston suburb of Spring, Texas. Biles’s grandparents eventually adopted the pair in 2003. By the age of six Biles was involved with gymnastics and enrolled in a training program at Bannon’s Gymnastix in Houston.  By the age of eight she started training with gymnastics coach Aimee Boorman.

Biles began competing as a gymnast in 2007.  In the 2011 American Classic in Houston, Texas, the fourteen-year-old placed third in the all-around event, first on vault and balance beam, fourth on floor exercise, and eighth on the uneven bars. Later that year, Biles competed at the 2011 CoverGirl classic in Chicago, Illinois where she placed twentieth all-around and fifth on balance beam and floor exercise.

In 2012, Biles competed in the American Classic in Huntsville, Texas, where she placed first all-around and on vault, tied second on floor exercise, placed third on the balance beam and forth on the uneven bars. That same year she competed in the Alamo Classic, the Houston National Invitational, and Secret U.S classic. In 2013, Biles was an all-around winner at the P&G Championships and later that year she became the first female African American athlete to wind gold all-around in the World Gymnastics Championship. In 2014, Biles took the US and World titles in the all-around competition, winning gold in the vault, floor exercise, balance beam, and all-around at the Secret U.S. Classic that same year.

In 2015, Biles became the first female to win her third consecutive world all-around title, giving her a record ten gold medals in international competition. The following year she earned a spot on the 2016 Olympic team with fellow gymnasts Laurie Hernandez, Aly Raisman, Gabby Douglas, and Madison Kocian. Calling themselves the “Final Five” Biles led the team, winning four gold medals and one bronze in the Olympic Games in Rio.  Biles won the four gold medals in Team, All-around, Vault, and Floor Exercise, and a bronze medal in the Balance beam. With those medals, Biles joined only three other gymnasts who had won multiple gold medals in the Olympics Games: Larisa Latynina of the Soviet Union in 1956, Vera Caslavska of Czechoslovakia in 1968, and Ecaterina Szabo of Romania in 1984.

The many Olympic and World Championships medals won by 4’8,” 104-pound, nineteen-year-old Biles by the year 2016 have made her the most decorated gymnast in U.S. history.