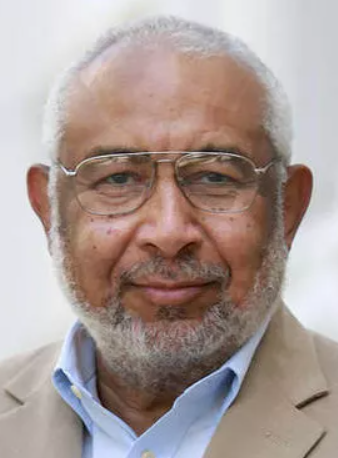 African American Latter Day Saints (LDS) Church activist Darius Gray was born in Colorado Springs, Colorado, to Elsie Johnson and Darius McKinley Gray on December 12, 1945. His mother was a domestic worker (maid), and his father a handyman. His grandfather, Louis Gray, was born a slave in Marshall, Missouri.

Gray, a journalist and a businessman, grew up in Colorado Springs where he attended Parker High School. Later he enrolled in Columbia University.  In 1964 Gray, while living in Colorado Springs, decided to be baptized in the LDS church after listening to Mormon missionaries. In his pre-baptismal interview, however, he learned that black men were not permitted to be ordained to the priesthood, and no person of black African descent was permitted to receive the “endowment” in LDS temples. After a revelatory experience, Gray decided to be baptized regardless of the restrictions.

Gray moved to Provo, Utah, where in 1965 he became one of two black students at Brigham Young University.  The other, a woman, left when a group of students yelled epithets and threw apple cores at her. The dean of students told Gray that he must have no interaction with white women. At the end of the school year, he moved to Seattle, Washington, vowing never to return to Utah.

In 1971 Darius Gray met with two other black Mormon men: Ruffin Bridgeforth and Eugene Orr. The three decided that Gray would contact church leaders to find support for black Mormons, many of whom were the descendants of nineteenth century black pioneer Mormons. Three members of the LDS hierarchy, Gordon B. Hinckley, Thomas S. Monson, and Boyd K. Packer, met with Gray, Orr, and Bridgeforth. As a result of these meetings, the LDS Genesis Group, a support organization for black Mormons, was founded on October 19, 1971. Two of the three church leaders, Hinckley and Monson, would later preside over the LDS Church. Bridgeforth was named the first president of the Genesis Group, with Gray and Orr as his counselors.

Gray was not active with the Genesis Group when LDS leaders lifted the priesthood ban on June 8, 1978, but he resumed activity shortly afterward and became the Genesis president in 1996. During his presidency, he, with Margaret Blair Young, co-authored a trilogy of historical novels and co-produced two documentaries about black history in the Mormon Church. He and Marjorie (Marie) Taylor also supervised the digitization of the Freedman’s Bank Records which made family records available to millions of African Americans. Under his direction, the Jane James and the Elijah Abel monuments were dedicated in 2000 and 2002 respectively, memorializing the lives and contributions of these two black Mormon pioneers.

Although Darius Gray was released as Genesis president in 2003, he continues to build bridges between families and between faiths.