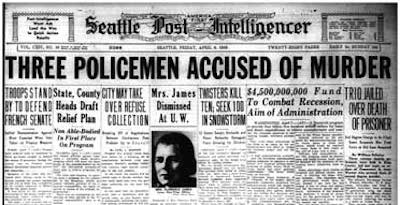 On March 26, 1938, Berry Lawson, a twenty-seven-year-old African American waiter staying at the Mt. Fuji Hotel located on Yesler Way in downtown Seattle, Washington, was reportedly asleep in a chair in the hotel lobby. He was spotted by three Seattle Police Department officers, who approached Lawson to arrest him for loitering. An altercation ensued, and 90 minutes later, Lawson was pronounced dead at City Emergency Hospital with a fractured skull. According to the Seattle Times, the three officers, Patrolmen F.H. Paschal, W.F. Stevenson, and P.L. Whalen, “declared Lawson apparently was under the influence of a stimulant and broke away from them and plunged headlong down a flight of stairs.”

On April 8, Paschal, Stevenson, and Whalen were charged with second-degree murder in the death of Berry Lawson. They surrendered at the prosecuting attorney’s office and were held in lieu of $5,000 bail. Chief Sears suspended all three without pay and then fired them one month later. Meanwhile, Paschal, Stevenson, and Whalen made claims in the newspaper, suggesting that the real reason behind their prosecution was connected to something else. Stevenson stated, “I know the white slave interests are out to get us for our many arrests in recent “skid road” white slavery investigations. They’ve made numerous threats, but I figured it would be in the nature of physical violence—a knife in the back—but nothing like this.”

Intrigue around the case rose with the emergence of a “mystery witness.” Travis Downs was a white hairdresser who claimed he was paid $35 by Paschal, Stevenson, and Whalen and put on a train to Portland, Oregon the day Lawson died. Downs was to remain out of town while the case was being investigated, and he even produced an envelope he had received in Portland that the officers allegedly had sent; the envelope contained an additional $50. However, Sylvester Jackson persuaded Downs to return to Seattle, and he ultimately testified that he had seen the three officers beat Lawson.

On June 10, a little over two months after the death of Berry Lawson, all three officers were convicted on a lesser charge of manslaughter and sentenced to 20 years each in prison. Following the verdict, legal appeals and political maneuvering kept the decision in limbo. The three officers were temporarily released until their convictions were upheld in January 1939 by the Washington State Supreme Court which ruled, “The officers used more force than was necessary in taking Lawson into custody.” In spite of this ruling, Washington Governor Clarence D. Martin pardoned Paschal and Stevenson later that spring and Whalen in December 1939. After receiving his freedom, Whalen took responsibility for Lawson’s death.