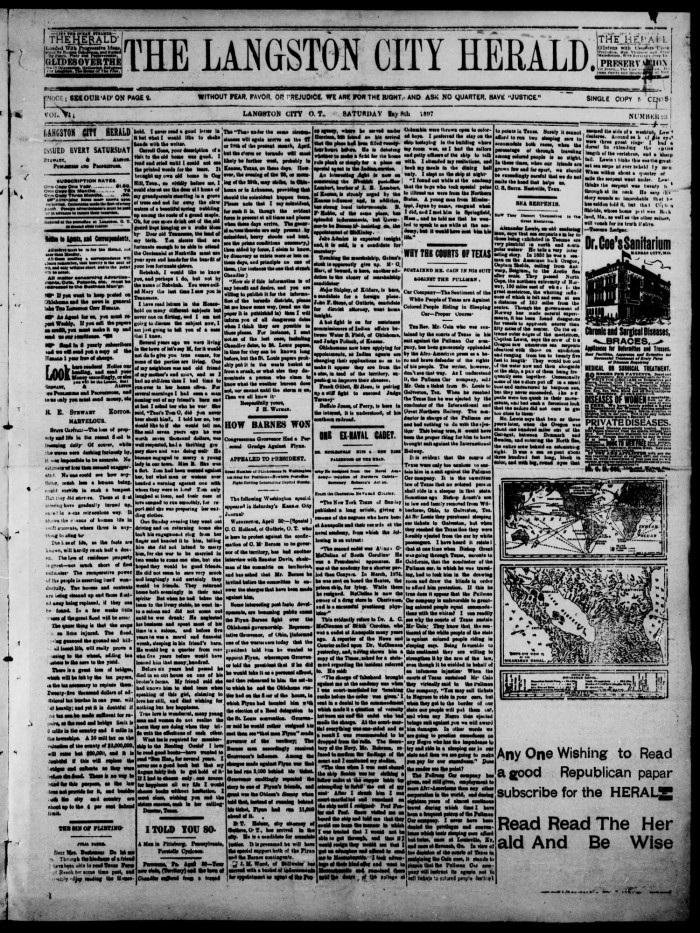 The Langston City Herald was a black newspaper based in the Oklahoma Territory but with circulation throughout the South.  The paper was founded and edited by Edwin and Sarah McCabe in 1890 soon after they relocated from Kansas to the Oklahoma Territory.  Because its readership was spread throughout Kansas, Arkansas, Louisiana, Texas, and Missouri, the Herald was vital to the black immigration to Oklahoma.

The McCabes used the Langston City Herald to promote the city of Langston that they had helped found, as a refuge from African Americans fleeing persecution in the South.  “Her teachers are colored. Her public schools furnish through educational advantages to nearly 200 colored children” the newspaper proclaimed to its wide readership.  The Herald also claimed the Oklahoma prairie was superior to the South for growing cotton, wheat, and tobacco.  Between 1891 and 1892 the Herald ran a column titled, ”Come Prepared or Not at All” which called for active men and women to settle the farmland around Langston City. It warned the prospective settlers than times could be rough and to be prepared to stick it out.

The Herald promoted African American homesteading in Oklahoma Territory by arguing it was the “last chance for free homes.“ One editorial boldly proclaimed: “Wherever you can find it go get 40, 80, or 100 acres of land and claim it as your homestead. As evidence that you do claim it, you must make some visible improvements. Drive a stake with your name on it, cut timber to lay the foundation of a house, do a little plowing or some other act that will show to others that you have occupied that piece of land.” The Herald also urged that these improvements be followed by more permanent ones and that a claim was quickly filed with the land office.

The Herald urged that everyone interested in making a homestead should bring “a Winchester, a frying pan, and a fifteen dollar filing fee.”  Thousands of African Americans responded to the Herald’s call.  By 1900 nearly 20,000 blacks had settled in Oklahoma Territory, with many of them coming to the Langston area.