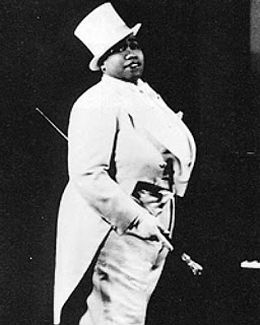 Gladys Bentley (stage name, Bobbie Minton) was a Harlem Renaissance blues singer and cross dresser.  She was one of the most well-known and financially successful black women in the United States in the 1920s and 1930s. She was a pioneer in pushing the envelope of gender, sexuality, class, and race with parody and exaggeration, personally and professionally.

The eldest of four children, Bentley was born on August 12, 1907 in Philadelphia, Pennsylvania to George L. Bentley from the U.S. and Mary (Mote) Bentley from Trinidad. Bentley reported wearing her three younger brothers’ suits to school when growing up. Her parents tried to “cure” Bentley by taking her to numerous doctors. The family struggled financially.

A talented pianist and blues singer, she ran away to New York City at the age of sixteen. From early on, Bentley overtly included sexuality in her act with her song content, stage moves, and attire. She often dressed as a man in her signature black-and-white tuxedo. In fact, she became the most prominent mannish lesbian of the Harlem Renaissance. A large, 250-pound woman, her deep voice appealed to straight, gay, black, and white audiences.

Bentley began singing at rent parties and buffet flats. She moved to speakeasies and night clubs in Jungle Alley, the center of Harlem’s sporting life. Okeh Race Records released eight singles of her music between 1928 and 1929. She had her own weekly radio program the following year.  By 1933, Bentley headlined in nightclubs and theatres such as The Cotton Club and The Apollo. She created her own musical revue with a chorus of eight male dancers in drag, the primary attraction at the well-known Ubangi Club, 1934-1937.

In Bentley’s heyday of the 1930s, she owned a Park Avenue apartment with servants and other accoutrements of wealth. Bentley claimed that she and her white female lover went through a civil union in New Jersey. With the repeal of Prohibition, her popularity and public tolerance of openly gay persons waned. Bentley moved to Los Angeles to live with her mother. Her success picked up again during World War II with the expansion of gay bars on the West Coast. She recorded in 1945 for the Excelsior label.

She surprised her audience by wearing dresses and publicly declaring in an August 1952 Ebony article, “I am woman again.” Her literary assertions of marriage to two different men could not be verified. However, later that year, she did wed Charles Roberts, a cook sixteen years her junior. They eventually divorced. She performed again, most often at the Rose Room in Hollywood and appeared two times on Groucho Marx’s television show in the 1950s. Toward the end of her life Bentley became a devotee of The Temple of Love in Christ, Inc. and prepared for ordained ministry. Gladys Bentley died suddenly from the flu in Los Angeles in 1960 at the age of 52.