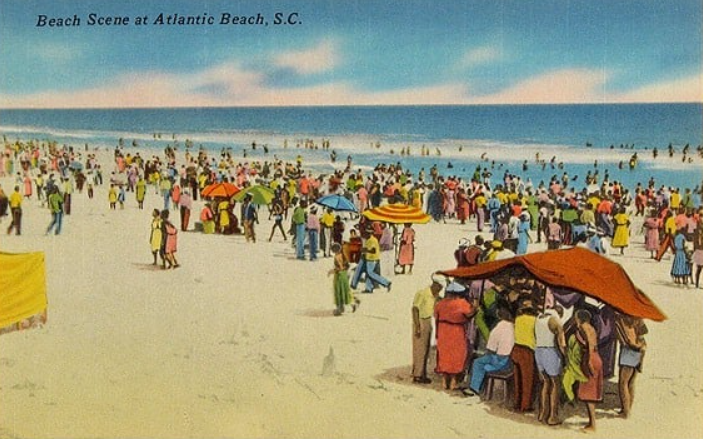 Atlantic Beach, South Carolina was one of the last all-black resorts to be developed along the Atlantic Coast.  Formed two years after the 1964 Civil Rights Act opened beach resorts to all visitors regardless of race, Atlantic Beach never had the opportunity afforded older black Atlantic coast resorts to build a loyal following among African American beach going vacationers.

The roots of Atlantic Beach stretch back to 1934 when men and women of mostly Gullah/ Geechee ancestry, who were the descendants of slaves who had lived along the South Carolina and Georgia coast for three centuries, opened small tourist motels, restaurants, night clubs, and novelty shops in the area. A few of them also chose to live year round in the beachfront community.  In 1936, the Intracoastal Waterway, which formed the western boundary of the community, opened to pleasure boats and commercial shipping, bringing far more attention to the region.  Two years later North Myrtle Beach was incorporated and soon became a regional family vacation destination.

By the 1960s an annual golfing tournament was organized in nearby Myrtle Beach which attracted tourists for the first time from beyond the region.  During the golfing boom, middle class African American tourists were not permitted to mingle with white travelers.  Also black entertainers invited to perform at hotels in Myrtle Beach and North Myrtle Beach could not lodge there. Together these racially discriminatory policies made unincorporated Atlantic Beach a popular destination spot for African American vacationers and entertainers from North and South Carolina.

By 1966, Atlantic Beach had incorporated and the state of South Carolina issued the town a charter declaring it a full-fledged municipality. Despite its late start, developers built or expanded black-owned hotels, restaurants, and nightclubs by 1970.  Atlantic Beach became known locally and among African Americans who visited the city as “The Black Pearl.”

By the early 1970s, however, desegregation along South Carolina’s Atlantic coast began to offer new opportunities for black vacationers.  Moreover Atlantic Beach’s black merchants were financially unprepared to compete for both black and white customers in this new non-segregated environment.  As Atlantic Beach went into decline, North Myrtle Beach became in the 1970s and 1980s one of the fastest growing cities in the nation. North Myrtle Beach annexed land near Atlantic Beach and now surrounds the small community on three sides.

Atlantic Beach has few hotels and motels remaining from its brief heyday as a late 1960s African American destination resort.  Nonetheless, the town’s council, community activists, and a redevelopment corporation are collaboratively working to revitalize the town while maintaining its historical significance and heritage. An annual bikers weekend keeps Atlantic Beach striving. Beginning in 1980, the Atlantic Beach Bike Fest has attracted more than 250,000 tourists to the town every Memorial Day weekend. The Atlantic Beach Historical Society is also working to raise the area’s profile through programs that recall the town’s brief historical legacy.