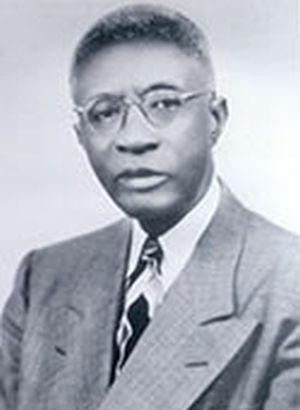 George Patrick Alphonse Forde was an important physician in early 20th century Houston, Texas. Forde was born in Barbados in September 1882.  Educated in the Caribbean, Forde first became aware of the possibility of a medical profession while he worked in a Panama Canal hospital.

Forde immigrated to the United States and attended Meharry Medical College in Nashville, Tennessee, and subsequently he graduated from the school at the top of his class in 1913. He did his medical residency in Muskogee, Oklahoma. In Muskogee Forde was introduced to the United States’ Jim Crow restrictions when he was refused hospital privileges at all-white hospitals.  Forde’s training was thus compromised because there was no hospital in the community where an African American physician could practice medicine.

Once Forde finished his residency he was persuaded to move to Houston, Texas by Carter Wesley, an attorney and newspaper owner. Wesley convinced Dr. Forde, who was a general practitioner, that he could have a successful practice in the Texas city. Forde took Wesley’s advice and moved his family to Texas, primarily because of the unique opportunity in Houston.  Houston blacks had just built the state-of-the-art Houston Negro Hospital, the largest all-black hospital in the South. Construction was completed in 1926, and the facility opened the following year in 1927.  Forde became one of the first physicians to work at the hospital. Later Forde worked at St. Elizabeth’s Hospital, also in Houston.

By the early 1930s Forde had become one of the most prominent black Houston physicians.  He made several contributions to the health care of African Americans in the Houston area.  During his time at Houston Negro Hospital Forde helped train nurses from Prairie View A&M University at Jefferson Davis Hospital. He also worked at the Negro Child Center, providing quality care to African American children.  After his retirement Dr. Forde stayed involved in Houston’s public health programs.  He also served as an active member of the Houston Medical Forum (HMF).

There are no clear records of when Forde married.  All that is known is that he and his wife had two children, both girls.

Dr. George Patrick Alphonse Forde died at St. Elizabeth’s Hospital in Houston in 1967, at the age of 84.  He was survived by his daughter Gladys Forde, a professor at Fisk University.