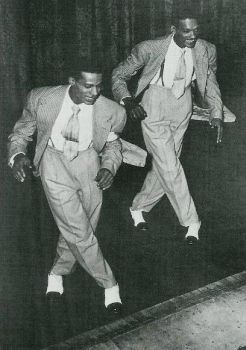 Cholly Atkins, born Charles Atkinson in Pratt City, Alabama, was a tap and jazz dancer/choreographer best known for his contributions as the house choreographer and coach for Motown dancing vocal groups from 1965 to 1971. Atkins was responsible for creating the synchronized classic jazz and rhythm-tap (minus the taps) routines for groups including Gladys Knight and the Pips, The Supremes, and The Temptations. To create his choreographic style, Atkins drew from vernacular dances such as the Charleston, Suzy-Z, and his early experiences choreographing chorus line routines on the Vaudeville circuit. His precise, choreographic style enabled Motown singers to perform synchronized, lyric-specific dance breaks and have enough breath left to continue singing.

Before his years with Motown, Atkins’ best-known contribution to tap dancing was his partnership with legendary tap dancer Honi Coles from the 1940s through the 1960s. Together, they created “Class Act,” a dance routine that emerged out of the soft shoe and evolved into the duo’s trademark style of precise, polished tap dance routines. Atkins and Cole performed at the Cotton Club and appeared with the big bands of Cab Calloway, Count Basie, Louis Armstrong, Lionel Hampton and Billy Eckstine. Atkins and Cole performed their show-stopping choreography in the Broadway musical Gentlemen Prefer Blondes, which ran between 1949 and 1953.

The decline of tap dance popularity began around 1944 with the advent of ballet choreography in Broadway shows and Hollywood films. In 1954, due to the lack of performing work available, Atkins became head of the tap department at the Katherine Dunham School of Arts and Research in New York City.  In 1988, tap dancer Dianne Walker convinced Atkins to participate in the Broadway show Black and Blue. Atkins had not tapped since 1965 but agreed to redo three soft-shoe numbers titled “Memories of You,” “After You’ve Gone,” and “I’m Confessin” for the production. Atkins’ choreography in Black and Blue won a Tony Award for Best Choreography in 1989. That same year he was asked to develop Motown-style choreography for the teen group New Kids on the Block.

Cholly Atkins built the Motown dancing look of the 1960s, but more importantly he reshaped popular vernacular dances into performing acts that transcended the test of time. The smooth, polished look recognizable in rock and roll stage acts today are direct descendants of the aesthetic look and choreographic methods of Cholly Atkins.