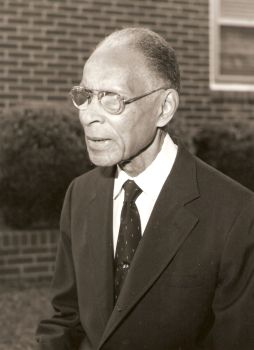 Scholar and sociologist Joseph Sandy Himes, Jr., was born April 5, 1908 in Jefferson City, Missouri.  Himes came from a highly educated family.  His father, Joseph Himes Sr., was a college professor.  His mother, Estelle Bomar Himes, was a teacher in the public school system.  Himes’ younger brother was the famous novelist, Chester Himes.  In high school, Joseph was blinded while conducting a chemistry experiment with gunpowder. His parents moved the family to Cleveland, Ohio where Joseph attended East High School, which had a heralded program for blind students.  Himes excelled and graduated near the top of his class.  He received a scholarship to Oberlin College, where he graduated magna cum laude with a BA in sociology in 1931.  The following year he received his master’s degree in economics and earned his PhD in sociology and economics from Ohio State University in 1938.

In 1965 Himes was elected president of the Southern Sociological Society.  Himes founded the North Carolina Sociological Association in 1969 and served as its first president.  Much of Himes’ research focused on understanding racial and ethnic relations and his work on racial conflict was employed to help facilitate school desegregation in North Carolina.  Himes received countless awards, most notably the 1970 Sperry Award for his sociological work on the black family and the 1980 DuBois Johnson Frazier Award from the American Sociological Association for his work in race relations.  Himes authored six books and published over one hundred journal articles.

Despite growing up legally blind and under Jim Crow segregation, Joseph Himes became one of America’s most accomplished scholars.  He challenged both racism and disability by practicing his personal motto, “It is the mind that sees.”