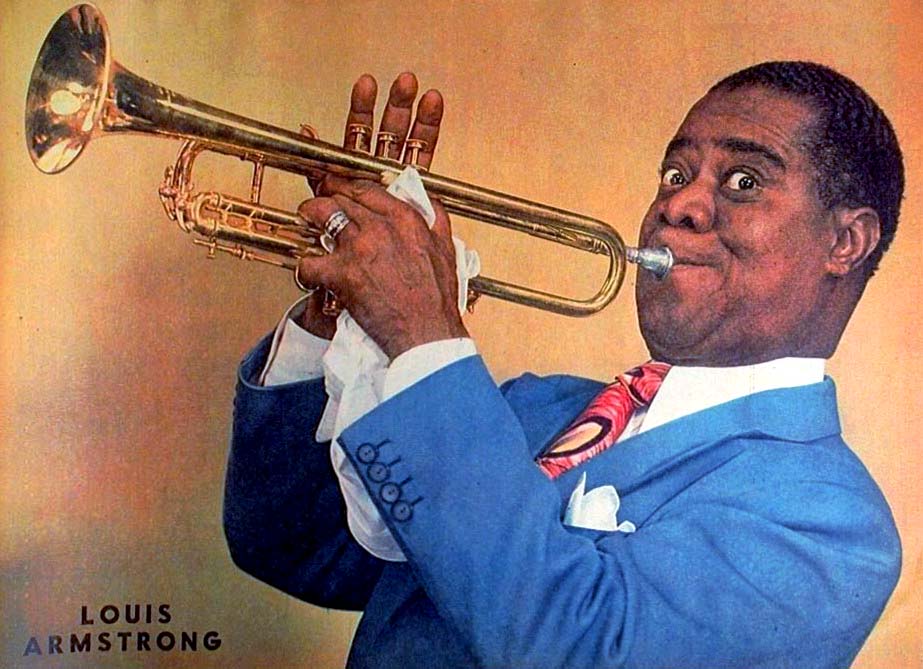 Louis Daniel (Louie) Armstrong is perhaps the most important and influential person in the history of jazz music, swing music, and jazz vocal styling.  His virtuosic ability with the trumpet, his distinctive gravelly low vocal style, his bright personality, and his band leadership abilities helped to build jazz into a popular musical genre and influenced nearly every jazz musician after him.

Louis Armstrong was born August 4, 1901 in New Orleans, Louisiana into an impoverished family.  In 1912 he fired a pistol in the air during a New Year’s celebration, was arrested, and sent to a waif’s home.  It was here that he learned how to play the cornet.  He immediately began playing in various jazz bands in and around New Orleans.  From 1922 to 1924 Armstrong was a member of King Oliver’s band in Chicago, Illinois which was the most popular jazz band of the time.  By 1924 as his playing abilities surpassed Oliver’s, Armstrong’s wife Lillian persuaded him to join Fletcher Henderson’s band in New York to move beyond Oliver’s shadow.

Armstrong brought to New York City a new, flowing, improvisational style of jazz that spread rapidly and influenced countless jazz musicians who were enthralled by it.  Soon he began recording backup for blues artists like Bessie Smith and Ma Rainey.  In 1925 he began his highly successful “Hot 5” albums. These albums introduced New Orleans jazz to a national audience, highlighted Armstrong’s virtuoso trumpet playing (he switched from cornet in 1927) and featured his “scat” singing style.  Among his many hits were “Heebie Jeebies,” “Potato Head Blues,” “West End Blues,” and “Weather Bird.”

By the early 1930s Armstrong had developed his talents as a showman as well, leading several big bands on a national stage, enjoying commercial success, and becoming a household name.  He played several small parts in movies and took two trips to Europe, earning the nickname “America’s goodwill ambassador” for his warm caring demeanor and big heart.

Armstrong’s jovial demeanor changed in 1957 following the Little Rock Crisis.  Scheduled for another goodwill tour of the Soviet Union, Armstrong angrily cancelled his concert to protest what he saw as American racist behavior particularly in the South in regard to the opposition to school desegregation, and in particular the inaction of President Dwight D. Eisenhower who initially seemed to allow Arkansas Governor Orval Faubus to block the integration of Little Rock’s Central High School. Armstrong’s seemingly uncharacteristic angry protest reverberated around the world and led the State Department to urge the restoration of civil rights for black Americans to promote a positive image of the U.S. abroad over its major Cold War rival, the Soviet Union which used such incidents in its campaigns to win friends and allies in the Third World.

n 1947 he returned to his small band roots and formed the All-Stars sextet, embarking on a constant touring schedule of swing standards and Dixieland. Although jazz styles changed into the 1940s, Armstrong stuck with what he knew best, singing in his low, warm, gravelly voice, superior trumpet playing, and an endearing ability to appeal to diverse audiences with his personality and smile.  Armstrong even reached #1 on the pop charts in 1964, at the age of 63, with the hit “Hello Dolly!”  Louis Armstrong continued to perform until his death in 1971.