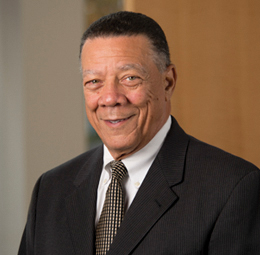 Born in Jackson, Mississippi in 1943, to a father who was a bricklayer, Anderson graduated from Tougaloo College in 1965. He entered the University of Mississippi Law School as the second black student to be admitted after Cleve McDowell, in 1963, who did not graduate.  Anderson credits NAACP lawyer Jack Young, who worked on the Medgar Evers case, as the principal person encouraging him to attend law school and especially the University of Mississippi.  Anderson’s admission also came only five years after James Meredith integrated Ole Miss.

Anderson started his legal career in 1967, practicing with the Mississippi NAACP Legal Defense Fund on significant matters, including desegregation and voter rights cases. In 1968, Anderson joined a private law firm, Anderson, Banks, Nichols & Stewart, where he practiced for the next eight years.

In 1976, Anderson was appointed as judge in the Municipal Court for the city of Jackson, Mississippi.  He later held successive judicial appointments, in 1977 to the County Court in Hinds County, in 1981 to the Circuit Court, and in 1982 to the 7th Circuit.  In 1985, Mississippi Democratic Governor William A. Allain appointed Anderson to the State Supreme Court.

In 1991, Anderson retired from the Supreme Court and joined a private law firm, Phelps Dunbar LLP, where he serves as a partner in the areas of commercial litigation, and regulatory and governmental matters.  Anderson has served or is serving on the boards of several publicly-traded corporations, including AT&T, Kroger, Burlington Resources, and BellSouth, as well as prominent nonprofit organizations, including The Nature Conservancy and the United Way. In 1995, Anderson held the Jamie L. Whitten Chair of Law and Government at the University of Mississippi.

For his storied career, Anderson has garnered a number of accolades.  In 1995, he was inducted into the Ole Miss Alumni Hall of Fame. In 2007, he was presented the Mississippi Bar Association’s Lifetime Achievement Award.  In 2009, Anderson was inducted into the National Bar Association Hall of Fame and two years later into the University of Mississippi School of Law Hall of Fame.  The Reuben V. Anderson Pre-Law Society at Tougaloo College is named after him. He was president of the Mississippi Chamber of Commerce in 2001 and has been a member of the University of Mississippi Foundation Board of Directors.  He currently serves as Chairman of the Mississippi Civil Rights Museum in Jackson and was one of its major fundraisers as the institution was being developed.

In 2017, Anderson and his wife donated more than $200,000 to the University of Mississippi Law School and to the William Winter Institute for Racial Reconciliation.

Anderson, who is a member of Sigma Pi Phi Fraternity, is married to Phyllis Wright Anderson, and the couple have three children, Roslyn, Vincent, and Raina, and two grandchildren.