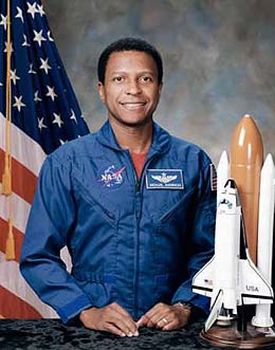 Michael P. Anderson, a former Spokane, Washington resident, was one of seven astronauts who died when Space Shuttle Columbia disintegrated during reentry on February 1, 2003. Born on December 25, 1959, in Plattsburgh, New York to Robert and Barbara Anderson, Michael Anderson had three sisters, Brenda, Diane, and Joann. Michael Anderson grew up following his father’s Air Force career around the nation until the family arrived at Fairchild Air Force Base. Anderson was 11 at the time. He graduated from Cheney High School in Spokane in 1977 and took degrees in physics and astronomy at the University of Washington in Seattle in 1981. Anderson met his wife, Sandra Hawkins, in Spokane and they raised two daughters.

A member of the Air Force ROTC while in college, he immediately entered active service and quickly rose through the ranks to Lt. Colonel as an electronics expert and pilot with the Strategic Air Command. He later earned a Master of Science degree from Creighton University in Omaha, Nebraska. Anderson was accepted for NASA astronaut training in 1995, and made his first Shuttle flight aboard the Endeavor in 1998 to carry supplies and new crewmen to the former Soviet space station Mir. He and his colleagues spent nine days in orbit.

Built in 1981, the Space Shuttle Columbia was the oldest of NASA’s Space Transportation System (STS) fleet. The ill-fated flight was Columbia’s 28th trip to space and the 113th STS mission. Columbia lifted off from Florida‘s Kennedy Space Center on January 16, 2003, under exceptional security due to fears that the presence of Israel Air Force Colonel Ilan Ramon, the first person from his nation to participate in space flight, might inspire a terrorist attack.  The mission was the first purely scientific Shuttle operation since 2000. The five men and two women aboard Columbia carried out an ambitious program of more than 80 separate experiments.

During the launch, large slabs of ice and a segment of insulation foam sloughed off the Shuttle’s main fuel tank and struck the bottom side of its left wing. Such incidents are not unusual, and engineers deemed any damage insignificant at the time, but final telemetry from the descending Shuttle indicated overheating in the left wing during its fiery reentry. Columbia was just 16 minutes from landing in Florida when NASA suddenly lost contact with it at 9 a.m. At that moment, the craft was descending at 12,500 m.p.h. from an altitude of nearly 40 miles on its glide path across Texas. Some local observers reported hearing a large explosion and many watched and recorded multiple fireballs as fragments of the Columbia rained down along a 100-mile swath of eastern Texas and Louisiana.  Michael P. Anderson was 44 at the time of the crash.

The Columbia’s loss was NASA’s first fatal accident during reentry in the entire 42-year history of its manned space program. Another pioneer black astronaut, Ronald E. McNair, died with six other astronauts when the Shuttle Challenger exploded during ascent on January 28, 1986. Including the death of three Apollo astronauts in a 1967 launch pad fire and the loss of four Soviet cosmonauts, a total of 21 people have died on space missions since Russian Yuri Gagarin became the first human to orbit the Earth on April 12, 1961.

HistoryLink.org.  A longer version of the Anderson profile can be found
at HistoryLink.org, http://historylink.org/index.cfm?DisplayPage=output.cfm&file_id=5160.