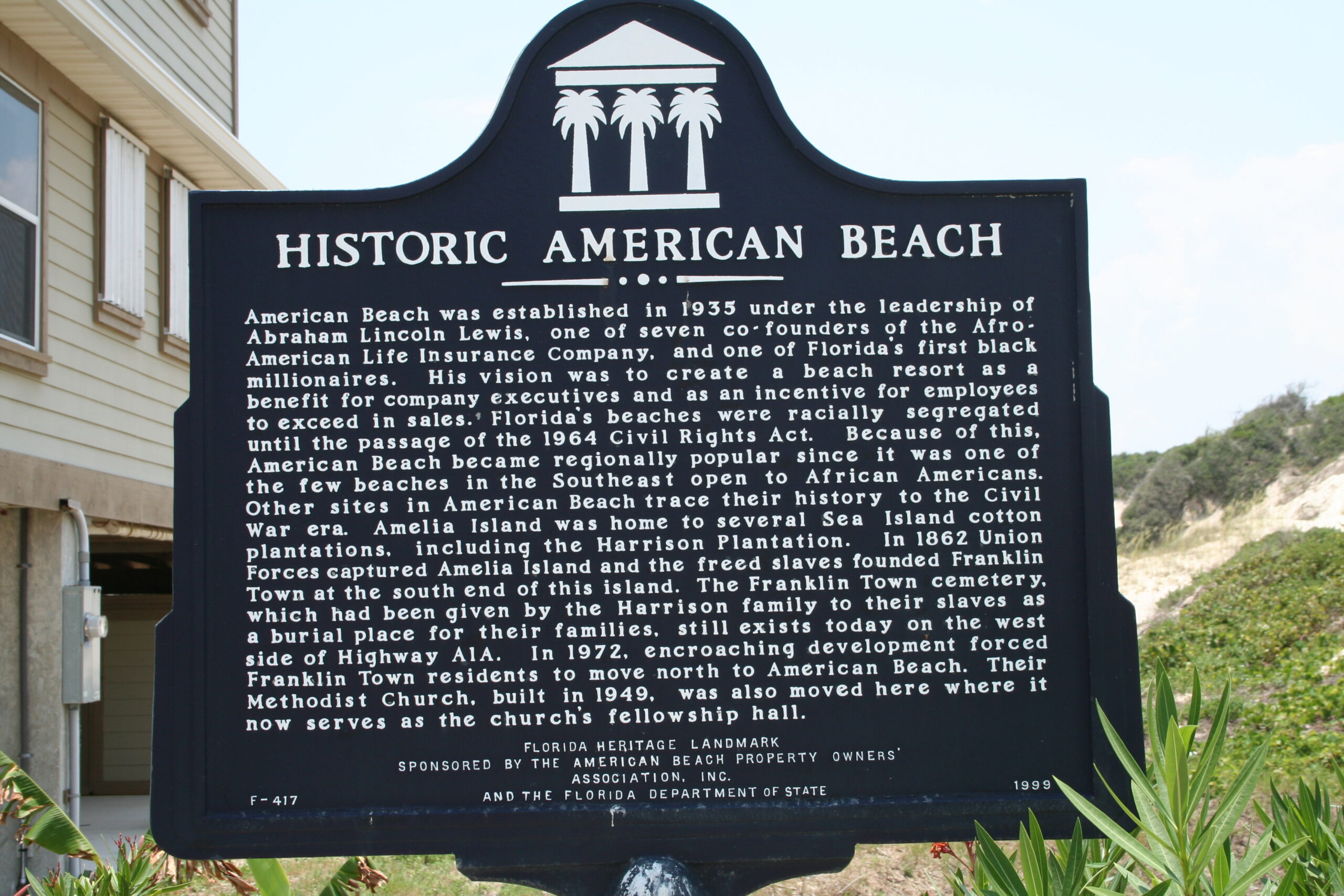 American Beach, the only beach in Florida that welcomed black Americans and offered safe, secure overnight accommodations during Jim Crow segregation, was founded in 1935 by the Afro-American Life Insurance Company (AALIC) which was established in 1901 to provide the Jacksonville, Florida black community with life insurance.  The firm’s Afro-American Pension Bureau purchased a 33-acre piece of property at the beach on nearby Amelia Island, partly as an investment but also to provide it as a resort area for black Floridians who had been excluded from other beaches.  Abraham Lincoln Lewis, the President of Afro-American Life, ironically named the area American Beach because he and others felt that in the United States beach access should be open to everyone.

Lewis and his partners envisioned a resort that would signify success, self-sufficiency, and respectability for middle-class African American families from Atlanta and Savannah, Georgia.  In addition to having beach access, the planned community also allowed for the building of resort and retirement homes.  Surveyed and platted on March 12, 1936, the original section of the beach property was added to the US National Register of Historic Places on January 28, 2002 as being worthy of historic preservation and marker designation.

Florida’s first black millionaires and largest landowners established homes there and encouraged other blacks to build homes and create the small businesses that they often dreamed of owning.  Between the late 1930s and the 1950s, tourists traveled for miles to frequent this black-owned oasis, passing dozens of resorts that were off limits to them, as made evident by the “For Whites Only” signs.

Eventually prominent entertainers made their way to the famous seaside pavilion which, over the years, hosted musicians like Cab Calloway, Ray Charles, and Duke Ellington.  For nearly three decades, American Beach thrived as an all-black recreational beach resort whose population swelled greatly in the summer months.

With the advent of integration, the beach lost customers to other resorts which were now open to African Americans.  Nature, however, played a role in American Beach’s decline as well: in 1964 Hurricane Dora destroyed many homes and businesses and owners either would not or could not afford to rebuild.  Consequently, like similar resorts across the nation, American Beach residents often abandoned or sold their properties—or, if they were not property owners, simply stopped visiting.

Nonetheless a small loyal group of multigenerational American Beach families kept their properties and, by the 1980s, attracted a new wave of prominent owners including tennis star Leslie Allen, TV actress Barbara Montgomery, and Emory University professor Eugene Emory.  Prominent educator Johnetta Cole also encouraged the revival of the resort.  She and her sister, Mavynee Betsch, known locally as the Beach Lady because of her long residence in American Beach, have established the A.L. Lewis Historical Society (as a tribute to their great-grandfather who is the founder of the community) and have developed the American Beach Museum to preserve the beach community’s unusual history.