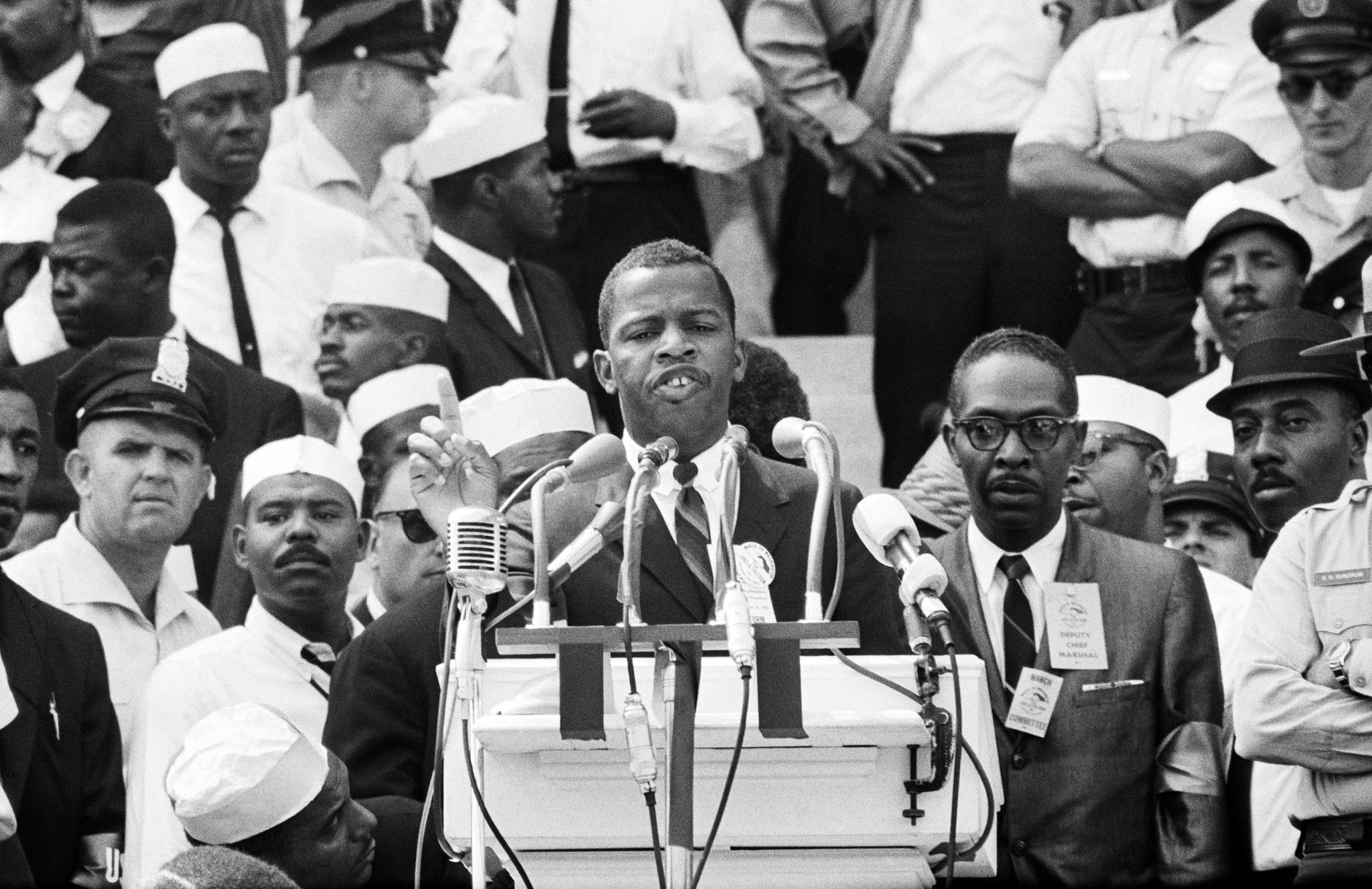 John Lewis, then the 23-year-old Chairman of the Student Non-Violent Coordinating Committee (SNCC) was asked to speak at the March on Washington on August 28, 1963.  When A. Philip Randolph, Martin Luther King and other civil rights leaders saw the draft of his speech which was critical of both the U.S. government and the tactics of older civil rights leaders,  they insisted that he modify his speech to make it less confrontational.  The infighting between Lewis and his supporters and the leaders of the March continued until the final moments before the SNCC leader arrived at the rostrum and gave a version more comfortable to his critics.  The original unedited version of Lewis’s draft, not the speech he actually delivered,  appears below.

We march today for jobs and freedom, but we have nothing to be proud of.  For hundreds and thousands of our brothers are not here.  They have no money for their transportation, for they are receiving starvation wages … or no wages, at all.

In good conscience, we cannot support the administration’s civil rights bill, for it is too little, and too late.  There’s not one thing in the bill that will protect our people from police brutality.

This bill will not protect young children and old women from police dogs and fire hoses, [for] engaging in peaceful demonstrations …

The voting section of this bill will not help thousands of black citizens who want to vote. It will not help the citizens of Mississippi, of Alabama, and Georgia, who are qualified to vote, but lack a 6th Grade education.  “One man, one vote,” is the African cry.  It is ours, too.  (It must be ours.)

It seems to me that the Albany indictment is part of a conspiracy on the part of the Federal Government and local politicians in the interest of expediency.

I want to know, which side is the Federal Government on?

We all recognize the fact that if any radical social, political, and economic changes are to take place in our society, the people, the masses, must bring them about. In the struggle we must seek more than civil rights; we must work for the community of love, peace and true brotherhood.  Our minds, souls, and hearts cannot rest until freedom and justice exist for all the people.

The revolution is a serious one.  Mr. Kennedy is trying to take the revolution out of the street and put it in the courts.  Listen, Mr. Kennedy, listen, Mr. congressman, listen fellow citizens, the black masses are on the march for jobs and freedom, and we must say to the politicians that there won’t be a “cooling-off” period.

We won’t stop now.  All of the forces of Eastland, Barnett, Wallace, and Thurmond won’t stop this revolution.  The time will come when we will not confine our marching to Washington.  We will march through the South, through the Heart of Dixie, the way Sherman did.  We shall pursue our own “scorched earth” policy and burn Jim Crow to the ground—nonviolently.  We shall fragment the South into a thousand pieces and put them back together in the image of democracy.  We will make the action of the past few months look petty. And I say to you, WAKE UP AMERICA.