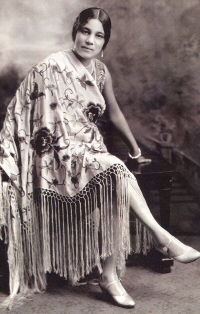 When in June 1928, the National Association for the Advancement of Colored People (NAACP) chose to hold its 19th annual conference in Los Angeles, California, it was the first time the Association’s meeting was held in the West. W.E.B. DuBois was the major speaker. He was followed by a then relatively unknown young attorney from Portland, Oregon, Beatrice M. Cannady. Part of Cannady’s Speech to the Conference on June 28 appears below.

Master of Ceremonies, Officers, and members of the National Association for the Advancement of Colored People, friends:

Our heart is thrilled as we look into your illuminated faces knowing full well that you are sharing with us the joy that is ours and the whole Pacific Coast in having this conference, which is representative of the noblest service of the finest men and women of both races in America, to meet in this, your fascinating City of Angels.

This organization which is doing more than any other organization in America to break down the barriers of race color and class prejudice is the only child of a woman and while this woman is biologically white- yet her long years of laboring for and with the Negro entering so fully into the things which effect his life in America that she has become psychologically a Negro.

Some few years ago it was our pleasure to read in a leading American magazine, a criticism on one of her books which she had written on some phase of Negro life in which the noted critic concluded: “It would be expected that she would take such a view point, being a Negro herself.”
Therefore we do ourselves and the Association honor when we honor our beautiful and beloved Mary White-Ovington, the founder and mother of the National Association for the Advancement of Colored People.

We shall not recount the lives and exploits of the many notable Negro women of several generations who have done so much for their race and country. We shall rather turn our attention to the program of the future which Negro women must prosecute in order that the work of those pioneers in the cause of freedom will not have been in vain.

For this we believe would be the wish of those Noble Women who have given their lives that our present status might be reached. We feel that we can hear them cry, “Honor us not in fulsome praise by doing the things we left undone.”

This is a big program in which the Negro womanhood of America will find abundant opportunity for service. A great philosopher and teacher once said, “The servants of humanity are the superior men of whatever race, nation or creed.” That she may serve well, the Negro woman must first learn to believe in herself and in her race, ridding herself always of any false notion of racial or sex inferiority.
We must admit that this is often hard to do hampered as she is by her sex, what we sometimes term a man’s world, and by her race in a white man’s world. But it can be done. The Negro Woman must sell her race, first to herself before she can get others to believe in it.

Negro Women who occupy places of leadership, whether with or without the consent of those led – are too often lukewarm about the race and are often responsible for much of the indignities against and half loaves handed out to our race. The time demands real women.

In this age of rapid material advancement and of personal material gain, Negro women of America must be the spiritual conservators of the race to see that their men lose not the vision that souls are more precious than self, and that a man’s life doth not consist in the abundance of the things that he hath. There is great danger that in the needed pursuit of economic strength Negro men forget that their liberties must be safeguarded. Their fate and especially that of their children will be a sad one if the Negro becomes in America a race of well-to-do serfs.

The Negro Women with understanding have ever been the spiritual conservators of the race. When they see their men forgetful of the fact that the most precious thing in life is freedom, they must be inspired as was the wife of Wendell Phillips in his hour of trial when he was face to face with temptation when she said, “Wendell don’t shilly-shally.”

You will recall that it was Sojourner Truth who blew to new vigor the dying flames of Frederic Douglas’ ardor when he had all but lost hope of freedom. We can hear even now her stentorian tone, “Frederick is God dead?” And the Sojourner Truths of today must call as she did, for God now as then, is the God of freedom and justice for all men.

Dr. Du Bois says: It appears as if the great black race is passing up the steps of human culture gave the world not the Iron age, the cultivation of the soil and the domestication of animals, but also, in peculiar emphasis, the mother-idea. And it is in the home that Negro women can do their finest piece of work for race and nation.

As the Greek and Roman mother sang lullabies over the cradles of their babes descriptive of heroic deeds such as fired their infants hearts with an ambition and a determination to excel–so the Negro mother of today must do likewise. The ignorance of the Negro race’s history both ancient and modern among Negroes themselves is colossal. It seems that there are those who really pride themselves upon knowing as little as possible of the race.

We recall that sometime ago we delivered an address on the progress of the Negro to a white audience in our city at which time we took with us a woman of the race just as company, never dreaming she would at all be interested in the things which we had to say.

We told of the Negro in exploration-pioneering in this country, of his inventions, his splendid war record, of his material wealth-his cultural and spiritual attachment, and when we were well on our way home this friend paid a very striking, though not elegantly worded compliment: “Gee, you sure shot a lot of Hot Air.”

It is the duty of the Negro woman to see that in the home there are histories of her race written by Negro historians. She should see to it that there are books of fiction, poetry and serious works. That pictures, paintings, etc., are in the home. The Negro mother has it within her power to invest less in overstuffed furniture for instance, and more in books and music by and about the Negro race so that our youth may grow up with a pride of race which can never be had any other way.

Recently in a local grammar school the discussion of a Negro Congressman came up amongst the young folk in a Thursday history class as a result of newspaper publicity regarding who was to fill the late Congressman Madden’s place. Of course there were the usual pros and cons as to whether a Negro was desirable. More cons of course. There was one colored child in the class; in fact he was the only one in the entire school.

It was the consensus of opinion that since a Negro had never been to Congress it was likely that he would never be sent. This little Negro lad not yet 12 years old quite frankly told them that they did not know the history of their country; then he told them of Hiram Revels and Blared K. Bruce of their record as Senators and added that there was a whole raft of Negro representatives. And then following up this process of informing his class mates, he said that if the U.S. Congress hadn’t been such a bone head and listened to Bruce and his foresighted progress for vital improvement of the Mississippi Valley – perhaps there wouldn’t have been a terrible flood.

How did this young Negro boy know these things? Because a Negro mother is collecting a library of Negro literature which her children read. This suave young lad has read the Underground R.R, Honor of the Freed, Unsung Heroes, Friends of the Roses, Up from Slavery, Souls of Black Folk, Portraits in Color, For Freedom, History of the Race, Weary Blues and many others. He is now reading the Dark Princess.

In fact the very physical organization (NAACP) is interracial in its makeup. And here again the Negro Women will find a broad avenue for rich service not alone to the Negro race, but to the White race as well.

Paradoxical as it may seem the Negro Women of America must become the teachers of the white race. In this interracial program there will grow up a strong sisterhood between white and colored women which will be the safest protection of the ideals for which the NAACP stands.