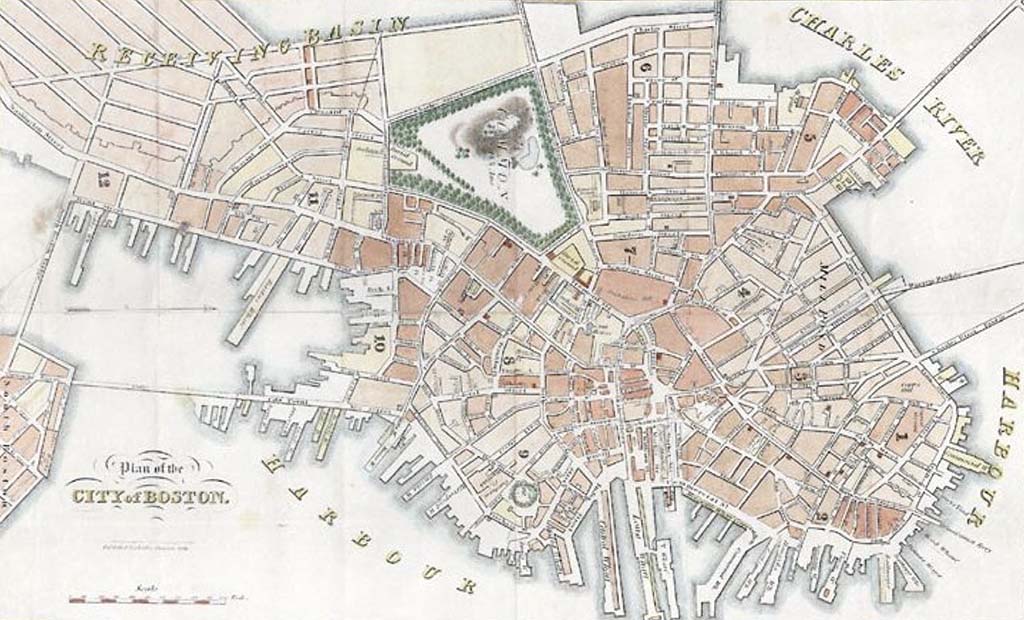 Maria W. Stewart (1803-1879) was one of the first American women to leave copies of her speeches. The address below is her second public lecture. It was given on September 21, 1832 in Franklin Hall in Boston, the meeting site of the new England Anti-Slavery Society. Although as an abolitionist, she usually attacked slavery, in this address she condemns the attitude that denied black women education and prohibited their occupational advancement. In fact she argues that Northern African American women, in terms of treatment, were only slightly better off than slaves.

Why sit ye here and die? If we say we will go to a foreign land, the famine and the pestilence are there, and there we shall die. If we sit here, we shall die. Come let us plead our cause before the whites: if they save us alive, we shall live—and if they kill us, we shall but die.

Methinks I heard a spiritual interrogation—’Who shall go forward, and take off the reproach that is cast upon the people of color? Shall it be a woman? And my heart made this reply —’If it is thy will, be it even so, Lord Jesus!’

I have heard much respecting the horrors of slavery; but may Heaven forbid that the generality of my color throughout these United States should experience any more of its horrors than to be a servant of servants, or hewers of wood and drawers of water! Tell us no more of southern slavery; for with few exceptions, although I may be very erroneous in my opinion, yet I consider our condition but little better than that. Yet, after all, methinks there are no chains so galling as the chains of ignorance—no fetters so binding as those that bind the soul, and exclude it from the vast field of useful and scientific knowledge. O, had I received the advantages of early education, my ideas would, ere now, have expanded far and wide; but, alas! I possess nothing but moral capability—no teachings but the teachings of the Holy spirit.

I have asked several individuals of my sex, who transact business for themselves, if providing our girls were to give them the most satisfactory references, they would not be willing to grant them an equal opportunity with others? Their reply has been—for their own part, they had no objection; but as it was not the custom, were they to take them into their employ, they would be in danger of losing the public patronage.

And such is the powerful force of prejudice. Let our girls possess what amiable qualities of soul they may; let their characters be fair and spotless as innocence itself; let their natural taste and ingenuity be what they may; it is impossible for scarce an individual of them to rise above the condition of servants. Ah! why is this cruel and unfeeling distinction? Is it merely because God has made our complexion to vary? If it be, O shame to soft, relenting humanity! “Tell it not in Gath! publish it not in the streets of Askelon!” Yet, after all, methinks were the American free people of color to turn their attention more assiduously to moral worth and intellectual improvement, this would be the result: prejudice would gradually diminish, and the whites would be compelled to say, unloose those fetters!

Though black their skins as shades of night, Their hearts are pure, their souls are white.

Few white persons of either sex, who are calculated for any thing else, are willing to spend their lives and bury their talents in performing mean, servile labor. And such is the horrible idea that I entertain respecting a life of servitude, that if I conceived of there being no possibility of my rising above the condition of a servant, I would gladly hail death as a welcome messenger. O, horrible idea, indeed! to possess noble souls aspiring after high and honorable acquirements, yet confined by the chains of ignorance and poverty to lives of continual drudgery and toil. Neither do I know of any who have enriched themselves by spending their lives as house-domestics, washing windows, shaking carpets, brushing boots, or tending upon gentlemen’s tables. I can but die for expressing my sentiments; and I am as willing to die by the sword as the pestilence; for I and a true born American; your blood flows in my veins, and your spirit fires my breast.

I observed a piece in the Liberator a few months since, stating that the colonizationists had published a work respecting us, asserting that we were lazy and idle. I confute them on that point. Take us generally as a people, we are neither lazy nor idle; and considering how little we have to excite or stimulate us, I am almost astonished that there are so many industrious and ambitious ones to be found; although I acknowledge, with extreme sorrow, that there are some who never were and never will be serviceable to society. And have you not a similar class among yourselves?

Again. It was asserted that we were “a ragged set, crying for liberty.” I reply to it, the whites have so long and so loudly proclaimed the theme of equal rights and privileges, that our souls have caught the flame also, ragged as we are. As far as our merit deserves, we feel a common desire to rise above the condition of servants and drudges. I have learnt, by bitter experience, that continual hard labor deadens the energies of the soul, and benumbs the faculties of the mind; the ideas become confined, the mind barren, and, like the scorching sands of Arabia, produces nothing; or, like the uncultivated soil, brings forth thorns and thistles.

Again, continual hard labor irritates our tempers and sours our dispositions; the whole system becomes worn out with toil and failure; nature herself becomes almost exhausted, and we care but little whether we live or die. It is true, that the free people of color throughout these United States are neither bought nor sold, nor under the lash of the cruel driver; many obtain a comfortable support; but few, if any, have an opportunity of becoming rich and independent; and the employments we most pursue are as unprofitable to us as the spider’s web or the floating bubbles that vanish into air. As servants, we are respected; but let us presume to aspire any higher, our employer regards us no longer. And where it not that the King eternal has declared that Ethiopia shall stretch forth her hands unto God, I should indeed despair.

I do not consider it derogatory, my friends, for persons to live out to service. There are many whose inclination leads them to aspire no higher; and I would highly commend the performance of almost any thing for an honest livelihood; but where constitutional strength is wanting, labor of this kind, in its mildest form, is painful. And doubtless many are the prayers that have ascended to Heaven from Africa’s daughters for strength to perform their work. Oh, many are the tears that have been shed for the want of that strength! Most of our color have dragged out a miserable existence of servitude from the cradle to the grave. And what literary acquirements can be made, or useful knowledge derived, from either maps, books or charm, by those who continually drudge from Monday morning until Sunday noon? O, ye fairer sisters, whose hands are never soiled, whose nerves and muscles are never strained, go learn by experience! Had we had the opportunity that you have had, to improve our moral and mental faculties, what would have hindered our intellects from being as bright, and our manners from being as dignified as yours? Had it been our lot to have been nursed in the lap of affluence and ease, and to have basked beneath the smiles and sunshine of fortune, should we not have naturally supposed that we were never made to toil? And why are not our forms as delicate, and our constitutions as slender, as yours? Is not the workmanship as curious and complete? Have pity upon us, have pity upon us, O ye who have hearts to feel for other’s woes; for the hand of God has touched us. Owing to the disadvantages under which we labor, there are many flowers among us that are

…born to bloom unseen, And waste their fragrance on the desert air.

My beloved brethren, as Christ has died in vain for those who will not accept of offered mercy, so will it be vain for the advocates of freedom to spend their breath in our behalf, unless with united hearts and souls you make some mighty efforts to raise your sons, and daughters from the horrible state of servitude and degradation in which they are placed. It is upon you that woman depends; she can do but little besides using her influence; and it is for her sake and yours that I have come forward and made myself a hissing and a reproach among the people; for I am also one of the wretched and miserable daughters of the descendants of fallen Africa. Do you ask, why are you wretched and miserable? I reply, look at many of the most worthy and interesting of us doomed to spend our lives in gentlemen’s kitchens. Look at our young men, smart, active and energetic, with souls filled with ambitious fire; if they look forward, alas! what are their prospects? They can be nothing but the humblest laborers, on account of their dark complexions; hence many of them lose their ambition, and become worthless. Look at our middle-aged men, clad in their rusty plaids and coats; in winter, every cent they earn goes to buy their wood and pay their rents; their poor wives also toil beyond their strength, to help support their families. Look at our aged sires, whose heads are whitened with the front of seventy winters, with their old wood-saws on their backs. Alas, what keeps us so? Prejudice, ignorance and poverty. But ah! methinks our oppression is soon to come to an end; yes, before the Majesty of heaven, our groans and cries have reached the ears of the Lord of Sabaoth [James 5:4]. As the prayers and tears of Christians will avail the finally impenitent nothing; neither will the prayers and tears of the friends of humanity avail us any thing, unless we possess a spirit of virtuous emulation within our breasts. Did the pilgrims, when they first landed on these shores, quietly compose themselves, and say, “the Britons have all the money and all the power, and we must continue their servants forever?” Did they sluggishly sigh and say, “our lot is hard, the Indians own the soil, and we cannot cultivate it?” No; they first made powerful efforts to raise themselves and then God raised up those illustrious patriots WASHINGTON and LAFAYETTE, to assist and defend them. And, my brethren, have you made a powerful effort? Have you prayed the Legislature for mercy’s sake to grant you all the rights and privileges of free citizens, that your daughters may raise to that degree of respectability which true merit deserves, and your sons above the servile situations which most of them fill?