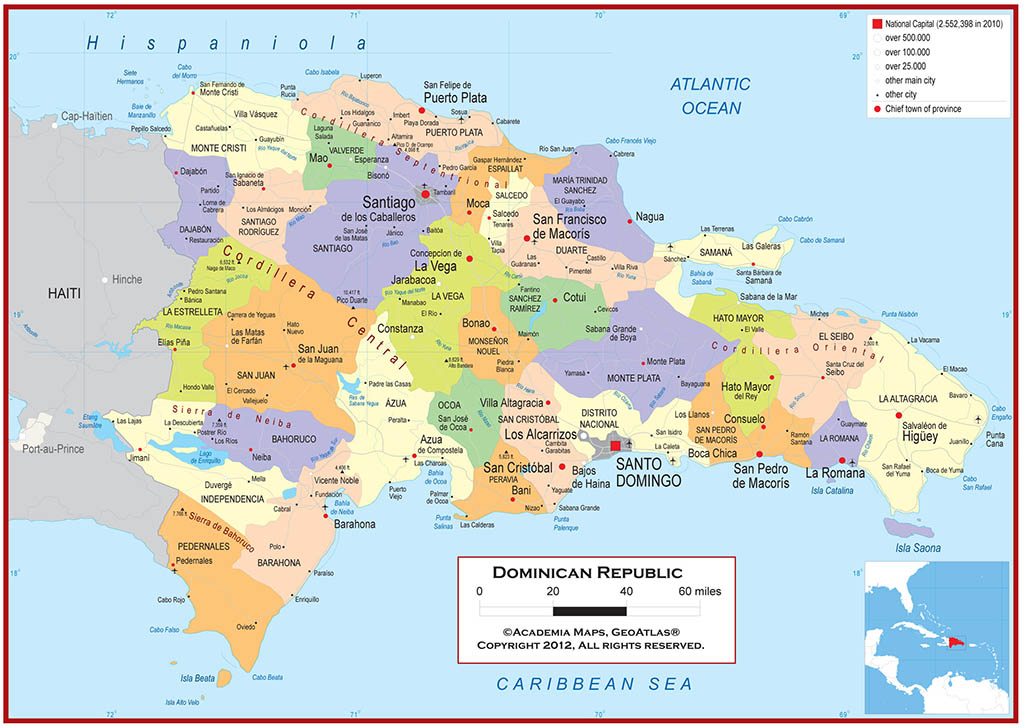 Santo Domingo de Guzman, the capital of the Dominican Republic and the cultural, financial, and industrial center of the nation, was founded in 1496 by Bartholomew Columbus, the younger brother of Christopher Columbus.  Situated on the southeastern coast of the island of Hispaniola (which The Dominican Republic shares with Haiti), Santo Domingo is considered the oldest European-founded city and political capital in the Americas. The city is located on lowlands near the mouth of the Ozama River where it empties into the Caribbean Sea.  Its estimated population of 3.4 million (2014 est.) comprises about 32% of the nation’s total population.

The Spanish colonial influence remains pronounced in this five-century-old city.  The military garrison of Fortaleza Ozama (1503) may be the oldest colonial building in the new world. The Fortaleza, along with the Catholic basilica, Catedral de Santa Maria La Encaracion Primada de America (begun in 1514), and the Museo Alcazar de Colon, the residence of Columbus’ son, Diego, comprise the historical heart of the city’s Zona Colonial.

Santo Domingo remained the colonial administrative center through the periods of Spanish, French, English, and Haitian control.  When the Dominican Republic claimed national independence from Spain in 1821, it was conquered by Haiti just two months later.  In 1844, Santo Domingo was again declared the national capital at the end of the Haitian occupation.  Nonetheless the independent nation was occupied by Spain (1861-1864) and twice by the United States (1916-1924, 1965-1966).  Throughout the centuries the city also kept its original name, except for the period when the nation was ruled by dictator Rafael Trujillo (1936-1961). During Trujillo’s dictatorship he named the capital after himself.  “Ciudad Trujillo” (Trujillo City) reverted to “Santo Domingo” after his assassination in 1965.

Besides serving as the colonial and later national capital, Santo Domingo was the principal port for Dominican export crops including most importantly sugar.  The city’s economy underwent a transformation in the late 20th century, emerging as a major tourist destination as well as a shipping and naval port.

Centuries of sugar cane cultivation led to the importation of tens of thousands of enslaved Africans.  After the abolition of slavery in 1822 as a result of the Haitian occupation and the subsequent decline of the plantation economy, many former slaves moved to Santo Domingo.  Today Santo Domingo reflects the racial and ethnic diversity of all of the Dominican Republic.  According to official pronouncements approximately 73% of its inhabitants are officially mixed race, 16% are white, and 11% are black.  The city has minorities of Chinese and Lebanese descent as well as significant numbers of recent Jamaican and Puerto Rican immigrants.  In the last decade Santo Domingo has also seen an influx of undocumented Haitian immigrants who may comprise as much as 20% of the city’s current population (2015).