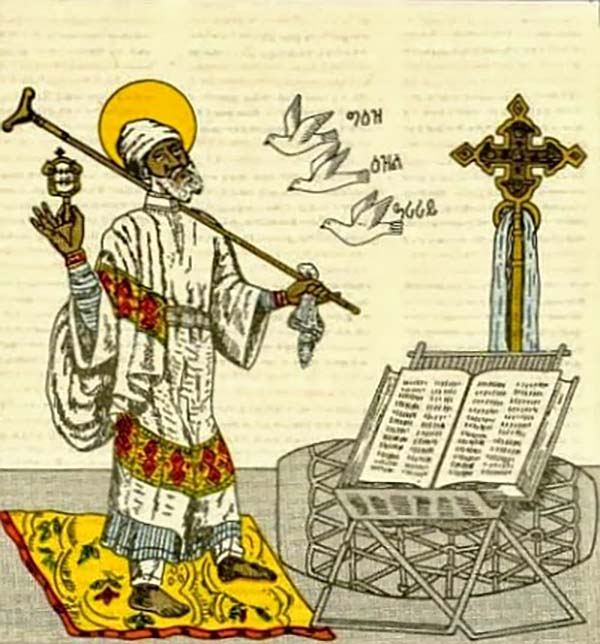 Composer, scholar, and pioneer of musical notation, Saint Yared was born in Axum, Ethiopia on April 25, 505 AD.  Little is known regarding his family background but scholars suggest he was part of the Axum priesthood. Yared studied intermittently throughout his life starting at the age of six. Legend has it that Yared had an epiphany while observing a caterpillar that was adamant in climbing to the top of a tree despite numerous failed attempts. His experience observing nature inspired him to maintain focus with his studies of the Holy Scriptures.

During his third return to seminary Yared came into his full intellectual potential and composed a system of musical notation. He had developed a passion for music and authored several religious hymns and songs.  Each composition is based on a combination of local traditions and the concept of the Holy Trinity. He divided his hymns into four segments representing the four seasons of the year, winter, summer, spring, and autumn, each with their own melodies. Yared compiled these works into a pamphlet he called The Book of Digua (chants of sorrow and tearful songs in the language of Ge’ez). He organized his compositions into three modes (displaced major scales) reflecting the Holy Trinity. In his composition “Deggua Yared” he created ten musical tones with notation.

Yared’s musical notation was developed centuries before the European seven-letter based system, although there is some evidence of notation in ancient Mesopotamia. With Yared’s three mode compositions, he formed the following ten notes: Yizet, Deret, Rikrik, Difat, Cheret, Qenat, Hidet, Qurt, Dirs, and Anbir. His composition consisted of dashes, curves, and dots each having a particular meaning.

Saint Yared died in 571 at the age of 66. All of Yared’s innovations were developed through a combination of formal study and experiences he had in and with nature. His work expressed a form of musical syncretism. Although not well known outside of Ethiopia, Yared is a major innovator in the development of medieval music.