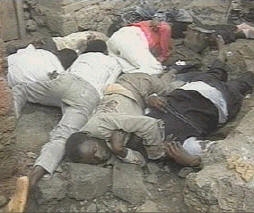 Beginning on April 7, 1994 and lasting until mid-July of the same year, the Rwandan Genocide was the government-mandated killing of Tutsis and Hutu political moderates. Having commenced in the capital city of Kigali, the violence spread rapidly throughout the Rwandan countryside where, in less than 100 days, an estimated 20 percent of the Tutsi population of Rwanda was slain.

When the RPF army invaded northern Rwanda on October 1, 1990, the Rwandan Civil War ensued. When no clear victor emerged, Rwandan President Juvénal Habyarimana, under intense international pressure to negotiate with the RPF, signed the first of the Arusha Accords with the RPF in August of 1992. The Arusha Accords initiated an immediate cease-fire, as well as a power-sharing arrangement in his government. Yet while promoting peace to the world to avoid sanctions, Habyarimana simultaneously advocated violence against Tutsis in order to maintain popular support among his increasingly-radicalized Hutu supporters.

In February of 1993 the RPF violated the Arusha cease-fire, killing hundreds of Hutu civilians. This violence destroyed the fragile alliance between the RPF and Hutu groups opposed to Habyarimana’s government. Appealing to Hutu youth enraged over these atrocities, the government-operated Radio Télévision Libre Mille-Collines (RTLM) began broadcasting anti-Tutsi and pro-Hutu Power rhetoric.

On October 21, 1993 neighboring Burundi’s first democratically-elected president Melchior Ndadaye, a Hutu, was assassinated by members of the Tutsi-dominated Burundi military. Consequently, ethnic relations in Rwanda dramatically deteriorated. Then, on April 6, 1994, Rwandan President Habyarimana’s plane was shot down by unknown assailants, triggering the genocide.

Within hours of the attack, death orders were issued by the RTLM, the Kangura newspaper, and other government-run media in Rwanda, resulting in the systematic killing of prominent Tutsi politicians in the capital city of Kigali. The murderous rampage then spread to the countryside, where in a little over three months an estimated 800,000 Tutsi men, women, and children were indiscriminately raped, tortured, and killed by Rwandan Hutu militiamen. Though United Nations (UN) peacekeeping troops were initially deployed, they were withdrawn as the violence precipitously escalated.

The genocide ended in July 1994 when armed Tutsi rebels invaded from neighboring Burundi, defeating the Hutus and halting any further killing. At the time of the massacre, the Hutu comprised around 85% of the total Rwandan population.