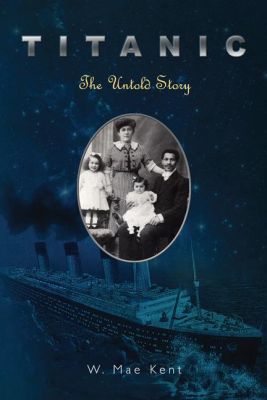 In 2009 W. Mae Kent, published Titanic: The Untold Story, the first historical fiction novel on the sinking of the R.M.S. Titanic which makes it’s central character, Nathan Badeau Legarde, a black man.  The inspiration for her story came from Joseph Phillipe Lemercier Laroche, an Afro-French citizen who died along with 1,516 other passengers when the Titanic sank in the North Atlantic on April 14, 1912.  In this article Kent for the first time writes why she chose to write the novel and the parallels between Laroche and the fictional Legarde.

The real life story of Joseph Phillipe Lemercier Laroche, the only black passenger on the ill-fated R.M.S. Titanic is fascinating. So much so that it served as the catalyst for my story, the first and only historical fiction novel set on the ship to feature a black hero.  In Titanic: The Untold Story, my protagonist, Nathan Badeau Legarde is loosely based on Joseph Laroche.  However, the word loosely is operative here because while there are strong similarities between the man who was actually on the Titanic and his fictional counterpart, I have also inserted some strong differences.

First, let’s look at some basic facts about Laroche.  He was born in Cap Haitian, Haiti, into the country’s royal family.  The son of a white, French army officer and a native Haitian girl, he grew up as a privileged child in the midst of wealth.  At the age of 15, he followed the custom of the Haitian ruling class and went to France to further his education. Shortly after receiving an engineering degree, Laroche married a white, French woman and they quickly had two daughters.  An intensely proud man he was  accustomed to living well. He and his wife were expecting a third child and he was struggling with an intolerable situation. He was employed at the Paris metro and was being paid less than his fellow employees.  He was repeatedly told that his lower wages were because of inexperience, however, he learned that newly hired workers with less experience than he had were being paid more.  To make matters worse, their second child had health problems that strained the family’s finances and despite his best efforts, he was not able to find another job that would pay him what he was worth because of the color of his skin. So, at the urging of his uncle, Dessalines Cincinnatus Leconte, who was the President of Haiti at the time, he decided to return to his homeland.  His uncle had procured a job for him as a mathematics teacher and assured him that he would be promoted to head master in a short period of time.  In Haiti, Laroche knew his prosperity would be guaranteed. After discussing the move with his wife and her family, the decision was made to move to Haiti.  A devout family man, he exchanged his tickets for the LaFrance for the Titanic in protest of that vessel’s policy against children dining with their parent’s in the ship’s dining room.

Unlike Laroche, my fictional character, Nathan Badeau Legarde, did not hail from Haitian royalty. He grew up in the late 1800s in the United States; New Orleans to be precise.  While both men had white, French fathers, their mothers were completely different.  Joseph Laroche’s mother was a privileged aristocrat, while Legarde’s mother was  a lowly washer woman. These choices were made to retain some similarities between the two men while creating some differences, and to give the story a realistic American flavor.   At the age of 10, Legarde had acquired just enough education to instill in him a sense of pride and an intolerance of inequality and injustice.  He’d experienced just enough opportunity to instill in him the belief that he had a right to do something with his life, to be somebody. Unfortunately, these same characteristics and beliefs get him into trouble repeatedly. First, as a child when he is forced to leave America for France, and later aboard the Titanic when he is confronted with bigotry and racism from the ship’s crew and some of its passengers.

As mentioned earlier, employment concerns figured prominently in the lives of both men, but in different ways.  In Titanic: The Untold Story, Legarde contends with an ignorant, bigoted, incompetent supervisor, while in real life, Laroche struggled to make enough money to support his growing family, a situation that finally prompted his exodus from France.  Both men had enough of a sense of themselves as qualified, intelligent employees to consider other options. Laroche was returning to Haiti where he all but guaranteed a good paying position, while Legarde had plans to start his own engineering firm upon returning to Paris. In the novel, Legarde worked for the same company that Laroche actually did work for: the French Metro. They even worked on the same Metro. Line: #7.

From what is known of Joseph Laroche and his movements aboard the Titanic, there is a great disparity between how he and Nathan Legarde conducted themselves. Avoiding conflict and attention to himself and his interracial marriage, Laroche was purposely cautious in his movements. He kept a low profile. He and his family went for their meals in the dining saloon and made no attempt to engage fellow passengers or make new friends.  The only social gathering that he and his family attended was a Church service on Sunday morning, the same day the ship went down. His only venture into the ship’s smoking room was also on that day. He got his family into a lifeboat that night soon after the first alarm was called and afterwards, went to the smoking room to await the end.

In contrast, my novel’s protagonist seeks out and enjoys social contact. His ferocious pride and sense of himself as a man prevents him from being cautious.  He readily engages those fellow passengers who are amenable to conversation and actually makes some friends on the ship. He frequents the Titanic’s smoking room regularly and puts in a couple of appearances at the state-of-the art gymnasium. He strolls the promenade deck with his family and makes no attempt to hide the fact that he is married to a white woman. In some ways, his outgoing nature, and a personality just shy of arrogant makes him a target for the ship’s less tolerant passengers and crew and contributes to his many confrontations on the ship.

Their behavior and how they chose to conduct themselves on the Titanic serve to highlight the different personal temperaments of Joseph Laroche and the fictional Nathan Legarde.  Laroche exhibited his pride in a more subtle, private way.  He didn’t need to make a great show of himself. He had a quiet self-confidence about him that required no explanation.  In contrast, and perhaps due to his early childhood experience, Legarde wants the world to know that he is somebody.  He’s not the kind of man to play it safe, to hide who he is.  He is a contender on life’s stage and rejects the low expectations and limitations society placed on black men of his time.

In fact, its Legarde’s traits, his intelligence, sophistication, and sense of dignity that most rankles the novel’s antagonist, Jimmy Ray Tuttle, a sociopath whose single-minded passion is to exact upon Legarde a cruel, misguided revenge.  Although it is known that Laroche and his wife had to endure some raised eyebrows and pointed whispers while on the ship, Laroche did not have to contend with constant conflict and danger. Nor was he forced to make the kind of gut-wrenching choices his fictional counterpart did. Nathan Legarde is forced into conflict at the very beginning of the novel.  He has to fight one battle after another, literally and figuratively, while Joseph Laroche had one momentous battle: with the sea as it pulled him and the mighty Titanic to a watery grave at the bottom of the Atlantic.

Joseph Laroche and Nathan Legarde were devoted family men.  They both had a tender, sentimental side to their characters and doted on their children.  However, in Titanic: The Untold Story, Legarde exhibits a controlling aspect of his personality in his relationship with his wife, Nicolette.  Nowhere in the research available on Laroche is there a hint that he was anything but egalitarian in his relationship with his wife, Juliette. I gave Legarde this personality trait to make his personality multi-dimensional and add a layer of realism to his character. After all, no one is perfect and for a fictional character to be believable, he has to have a blind spot, just like the rest of us, in the real world.

In the realm of fiction, historical or otherwise, Titanic: The Untold Story stands alone as the first novel to portray the sole black man who traveled aboard the infamous Titanic.  I allow Nathan Badeau Legarde, the book’s protagonist, to pay homage to Joseph Laroche by refusing to give in under the worst circumstances, by fighting until the bitter end, and ultimately, by defying death when he achieves his goal from the grave.