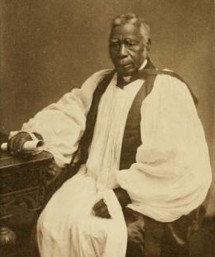 Samuel Adjai (or Ajayi) Crowther was the first bishop of Niger and the first Black bishop in the Anglican Church. As a teen, he was abducted into slavery then traded and sold a number of times before being rescued by Anglican missionaries. He went on to become an explorer, translator, and abolitionist.

Crowther was born into a prominent family in the western Nigerian village of Osogun, part of the Yoruba tribe. In 1821 his village was raided, and Crowther was captured into slavery, eventually ending up on a Portuguese slave ship in nearby Lagos. A British vessel, on the lookout for slave trafficking, intercepted the ship and freed the slaves including Crowther. They were transported to Freetown, Sierra Leone, a British colony established as a rescue home for liberated Africans. It was there that Crowther, under the supervision of the Anglican Church Missionary Society, was educated and baptized.

In 1841 Crowther was invited by the British Society for the Extinction of the Slave Trade and the Civilization of Africa to take part in an expedition up the Niger River with the aim of suppressing slave trading activities and spreading Christianity in the area. Although the expedition proved to be unsuccessful, Crowther kept a detailed journal of the trip that would earn him worldwide acclaim as a missionary. As a result of his efforts, he was summoned to England and in 1843 was ordained into the Anglican Church.

Crowther took part in two more expeditions, in 1854 and 1857, both of which met with varying success. He also wrote the first Yoruba dictionary and continued to preach and establish missionary settlements in southwest Nigeria, most notably at Abeokuta. His efforts were applauded by the Anglican church, and on St. Peter’s Day 1864 in England’s Canterbury Cathedral, Crowther was consecrated the first Bishop of Niger.

Samuel Crowther always preached a strong anti-slavery message, and his missionary work and attempts to ‘civilize’ African peoples were part of a broader abolitionist movement taking place among Anglican Protestants and Quakers at the time. Although Crowther cooperated extensively with the British colonial government, he also believed that the education of African peoples was vital to their gaining success in their own right. He often persuaded missionary boards to promote education and finance the development of new African schools.

Crowther was married twice and had six children. His grandson Herbert Samuel Macaulay was a nationalistic politician and strongly opposed British colonial rule.

Jesse Page, Samuel Crowther: The Slave Boy Who Became Bishop of the Niger, (S.W. Partridge & Co. London, 1889.); James. F. Schon and Samuel A. Crowther, Journals of the Rev .James Frederick Schon and Mr Samuel Crowther who, With the Sanction of Her Majesty’s Government, accompanied the Expedition Up The Niger in 1841 on behalf of the Church Missionary Society, 2nd Ed. ( Frank Cass & Co. Ltd., 1970)